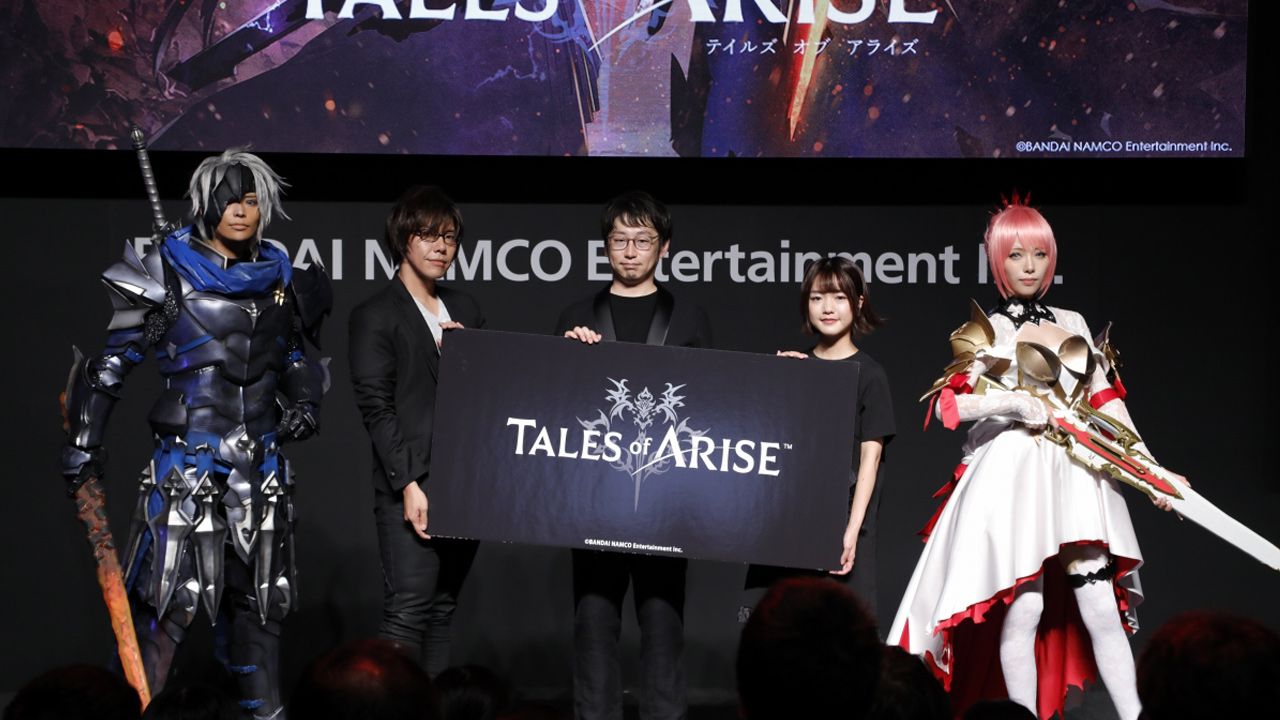 Hello everyone, this is Tomizawa.

Today I would like to elaborate on the TGS 2019 stage and fan meeting report that just ended the other day, as well as going over the technical aspects and originality of the project’s visuals that was presented at the CEDEC!

During the "Tales of Arise Stage", Arise’s main protagonist, Alphen’s voice actor, Takuya Sato, and heroine, Shionne’s voice actress, Shino Shimoji, were guests of honors. The two spoke about their characters in depth as well as answered questions that were pre-requested from fans. Both actors asked each other questions and answered them in detail.

Alphen and Shionne cosplayers were also there, which helped create a stage that conveyed the charm of the game. 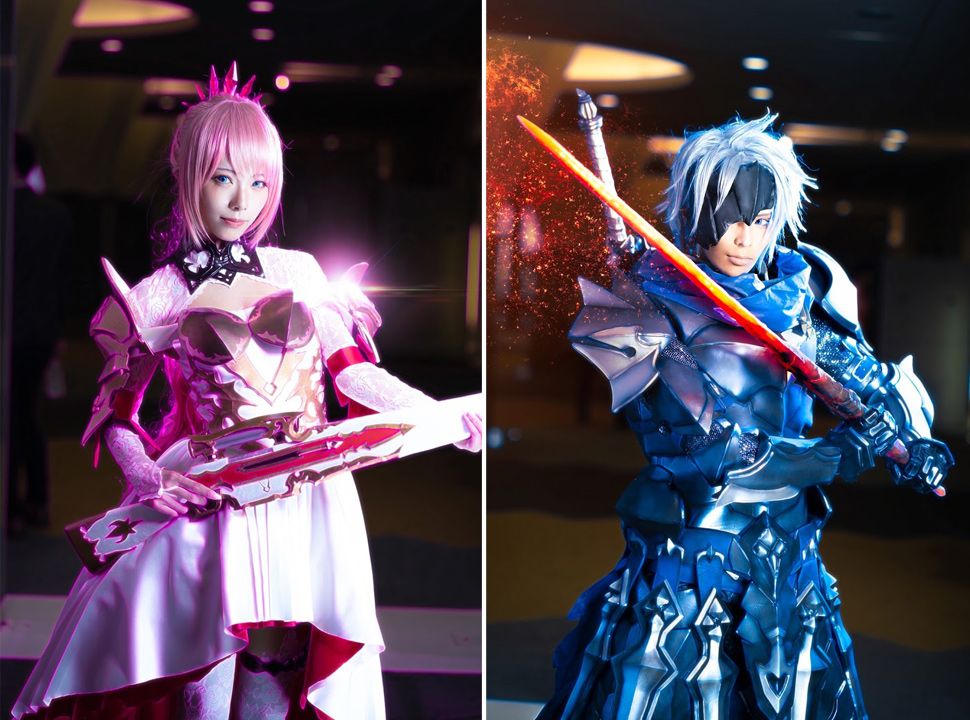 The "Torchflame Sword" that the cosplayer is holding is very detailed and high quality – it looks awesome! During the end of the stage, special footage was revealed showing a mysterious character’s back shot as well as a mysterious creature… 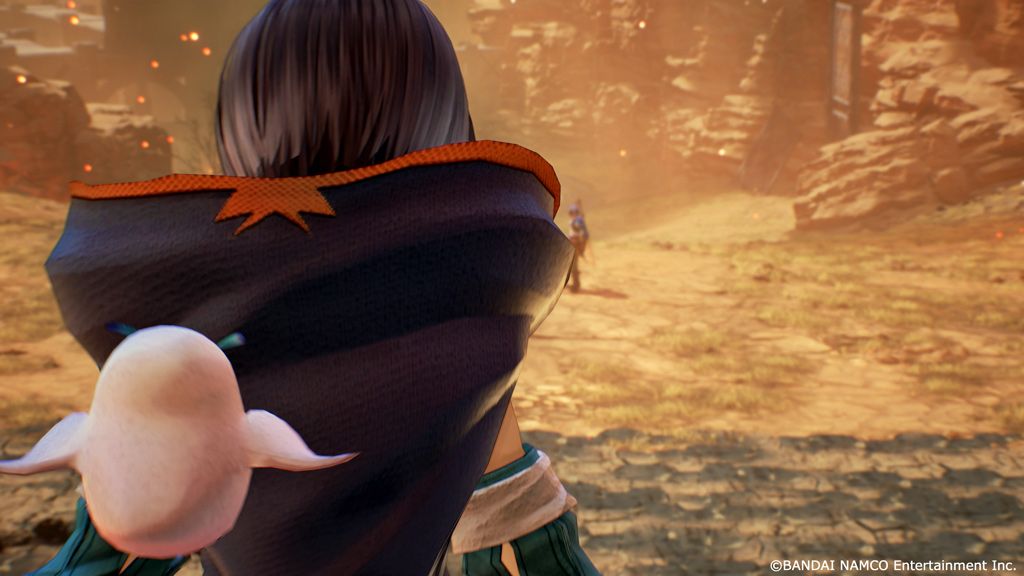 The ending made us ask many questions such as, “what is her story?” and “what happened to her?”

In the additional footage, we have also added new scenes from Alphen’s battle scenes.

With the usage of his normal weapons and his Torchflame  Sword, we showed how he performs in battle with the different weapons.

We have not been able to disclose any information about the battle system, but we are currently analyzing and implementing the good parts of the [Tales of] battle systems so we can make critical adjustments to create the new action scenes to be more exquisite and sophisticated. 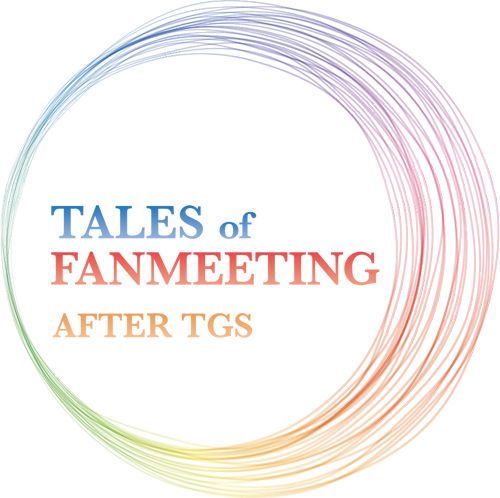 After the stage, we relocated the venue and the fans to participate in the "Tales of" series’ first ever fan meeting, which was another great hit. The fans that participated enjoyed the surprises that we added!

Even though this was our first attempt, there were many people who applied and not all of them could join. I apologize for that.

This time the number of participants was very limited, but we would like to continue having events where fans can interact in some way or form. We would love your cooperation.

Now going back 10 days from TGS, on September 4th, at a gaming engineer targeted event, CEDEC (https://cedec.cesa.or.jp/2019/session/detail/s5c9c5bc2d3123), we also had announcements for Arise.

The announcement was what we had originally reported, regarding the original graphics and its technical aspects and ingenuity of the works.

Although this information is not for general users, we thought fans might be interested in how the visuals came to be and what technical devices had been used to create the originality and atmosphere. So from my point of view, we would like to break down and introduce the information to you.

The main base engine for this project is called "Unreal Engine 4", which is used for general purposes on games all over the world. It focuses on the reality of light source processing.

To exceed the past series, we tried to build worlds with immersive feelings, so for this piece we used Unreal Engine 4. The visual team was instructed to meet the requirements of keeping the warmth and familiarity feeling that comes of the "Tales of" art at the same time.

To clarify, the Unreal Engine 4 creates a very realistic texture for the default arts, but to have the representation of the "Tales of" look, it would be something different. That is where we started the project of creating an original shader (a filter that processes shadowing) that can be added in layers.

Ex 1: A shader that creates a watercolor illustration-like atmosphere. 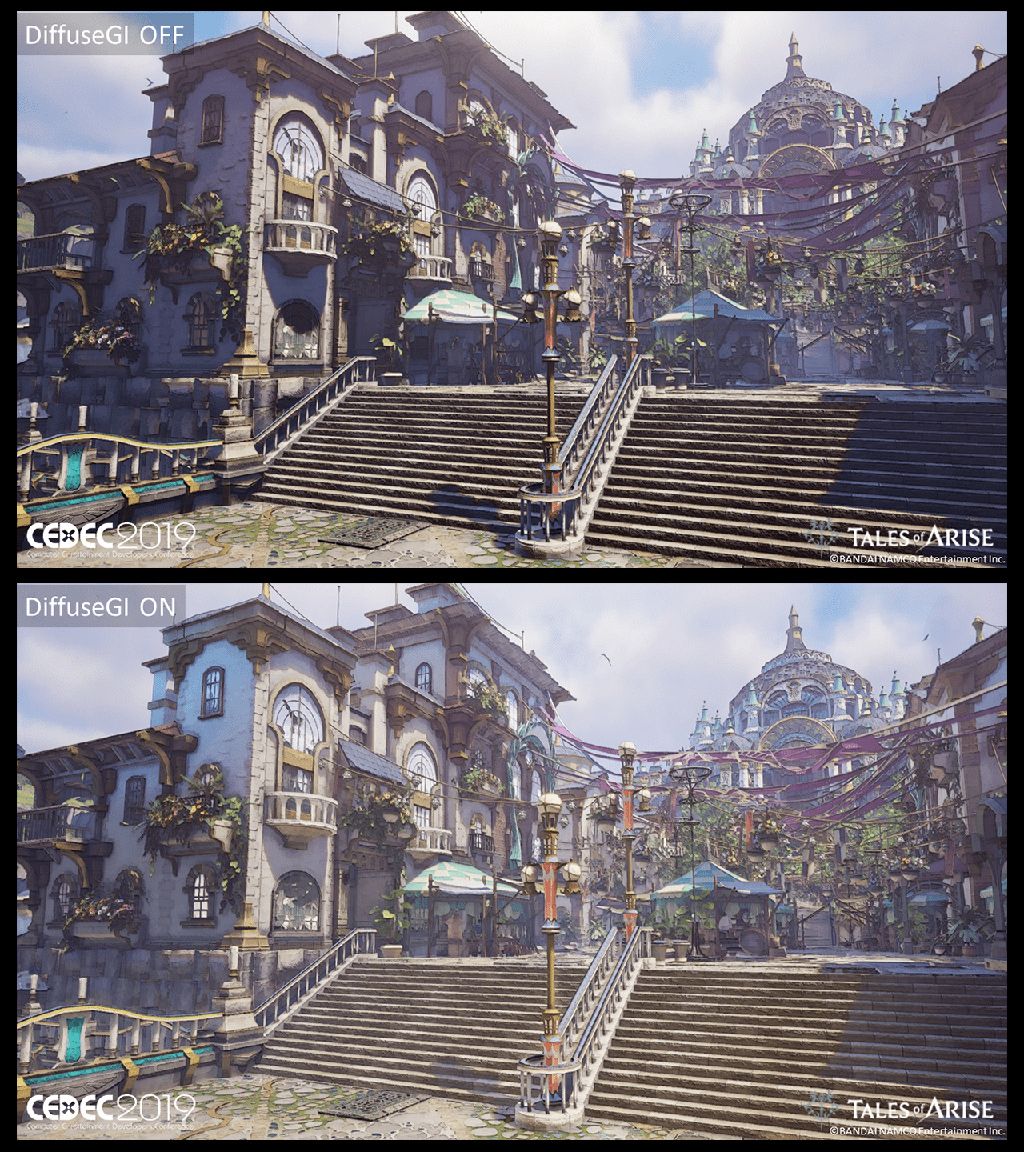 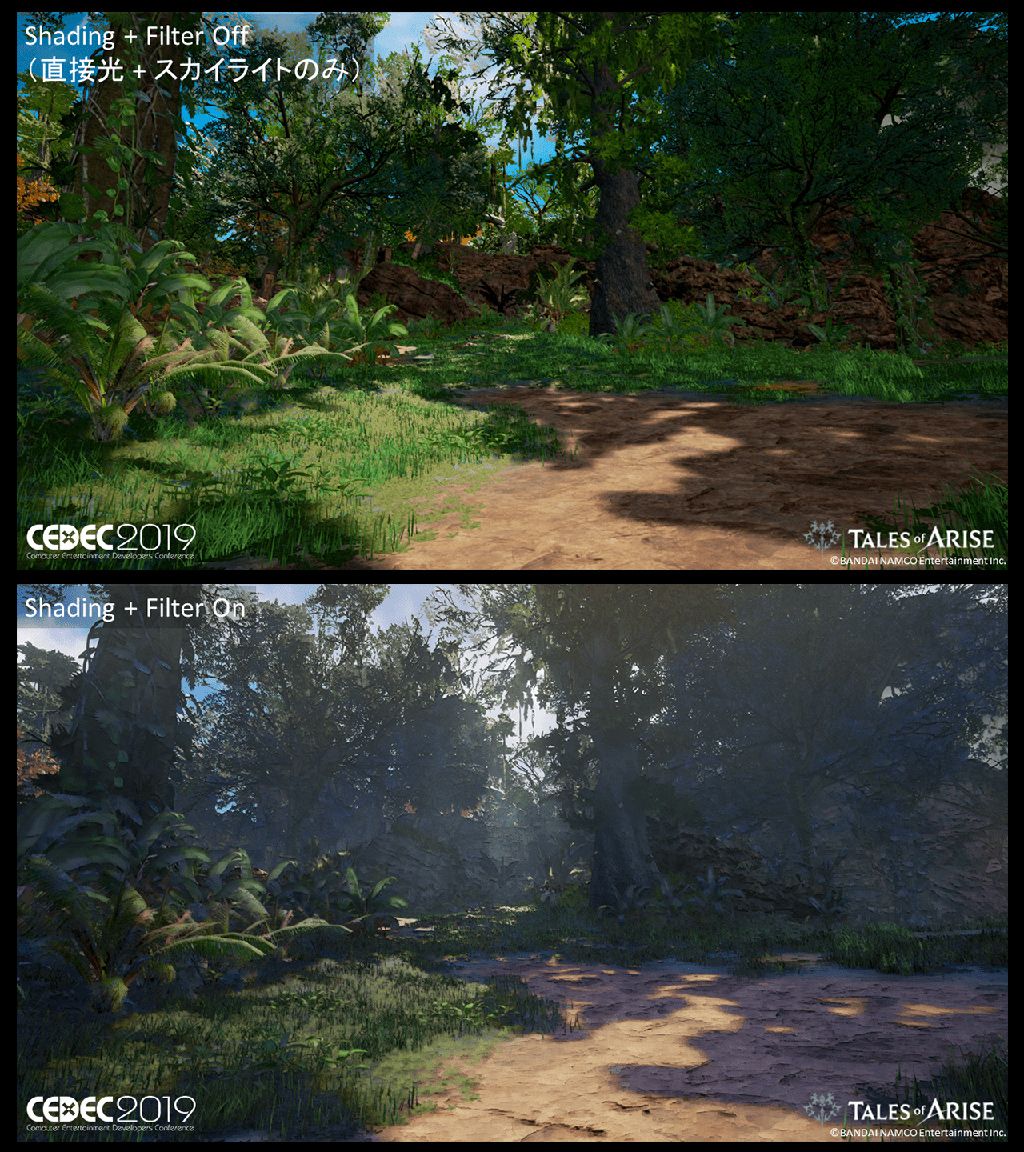 In these examples, to show the color adjustments to portray watercolors and also a hand-drawn like atmosphere, we have created an original filter that has a fog effect which emphasizes the whole picture to have an airy look. 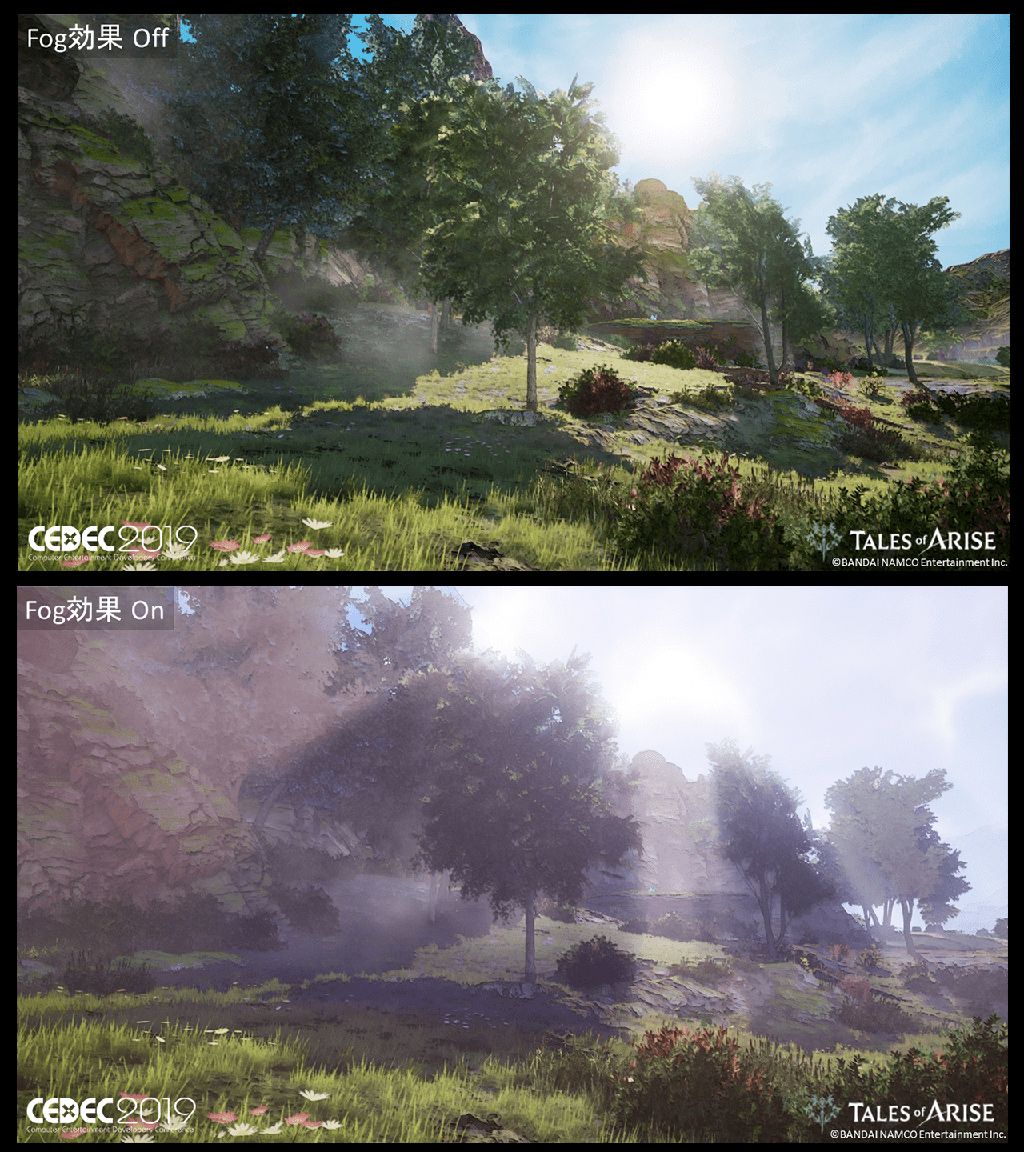 Regarding the fog effect, as you can see in the example, you can see the emphasized changes of the lighting representation in real time. Not only it gives off a realistic look, it also gives a fantasy feel to it as well.

In addition to the original changes, we have created the shaders to not just fill the whole piece of art but to be able to have an ‘out of focus’ type of effect where you can feel the watercolor changes more clearly. For example, the characters and the environment have a more realistic feel in the foreground, but a more watercolor feel for the background.

We would cut the masks around the regions (specifying the range of application and calculating independently) to create the ideal piece of art we are trying to achieve.

We continue to have an enormous amount of trial and error in this process for years.

As for the most important part, such as which shader do we use on the characters to best fit them in the scenery background, was the most core point that we discussed several times and attempted on trials. 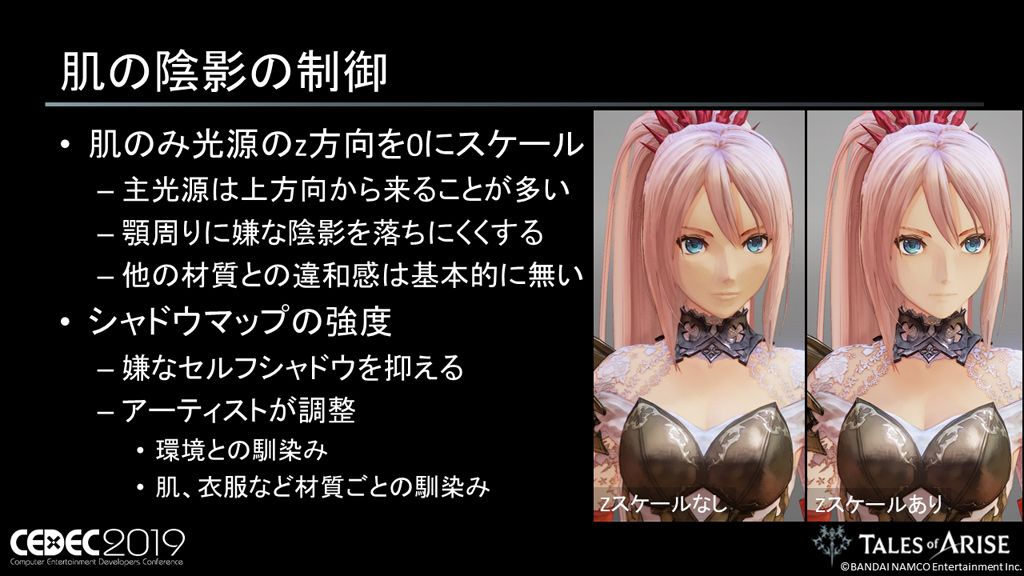 Regarding the character’s shading policy, we kept the importance of expressing the maturity and realistic sense of existence, though we must still keep the illustration-like feel as well. To keep this aligned, there are several processes that are implemented into this.

By controlling these points separately, we avoid losing the atmosphere created by the scenes and cameras and not ruining the details while keeping the originality of the characters and to presenting the charm and the feeling of them as well.

For the delicate pieces such as the scenery and the characters, we carefully made adjustments to achieve the current outcome of the game. Several layers of the shader would mean that the machine will have to continuously organize each memory piece which are “heavy” pieces to each scene, so we hit the hurdle of process failures, slower loadings.

To prevent this, we must create the shaders to be “light” for the program to properly organize them.

The current machines are very high in spec, but we must also always remember that for the game to smoothly run, we must work on adjustments in programming that even the eye cannot see and how this will interact with the other changes made in the process.

In result, of all the hard work to meet the very high goal, whenever a new change output is made, we hear several comments from the team, such as “Wow! The game improved in quality again!” Even though we are always watching for good surprises that come from the game results, recently there is more opportunity for the staff to be able to actually play the finished ROM, which results in comments like, “It actually feels different when you play it in person than looking at a screenshot. The excitement is absolutely different!” which are happy comments that motivate us each day.

Our goal is for fans to be able to enjoy the art piece as well as being able to feel as if they are in the world of the game. As it is an immersive feeling, we try to create the visuals to be realistic and have a charm that can be felt by the player.

If you are experiencing these feelings, then as a team we can say that we are succeeding and getting closer to our goal.

To conclude, it is difficult to explain in words, but I’m happy we were able to explain about how the work’s art was created from a more technical side today.

Please note that due to specific information, there may be parts that is not posted due to confidentiality

The team and I created this world and I hope that we can finish this project as soon as possible so many fans can play and enjoy it. 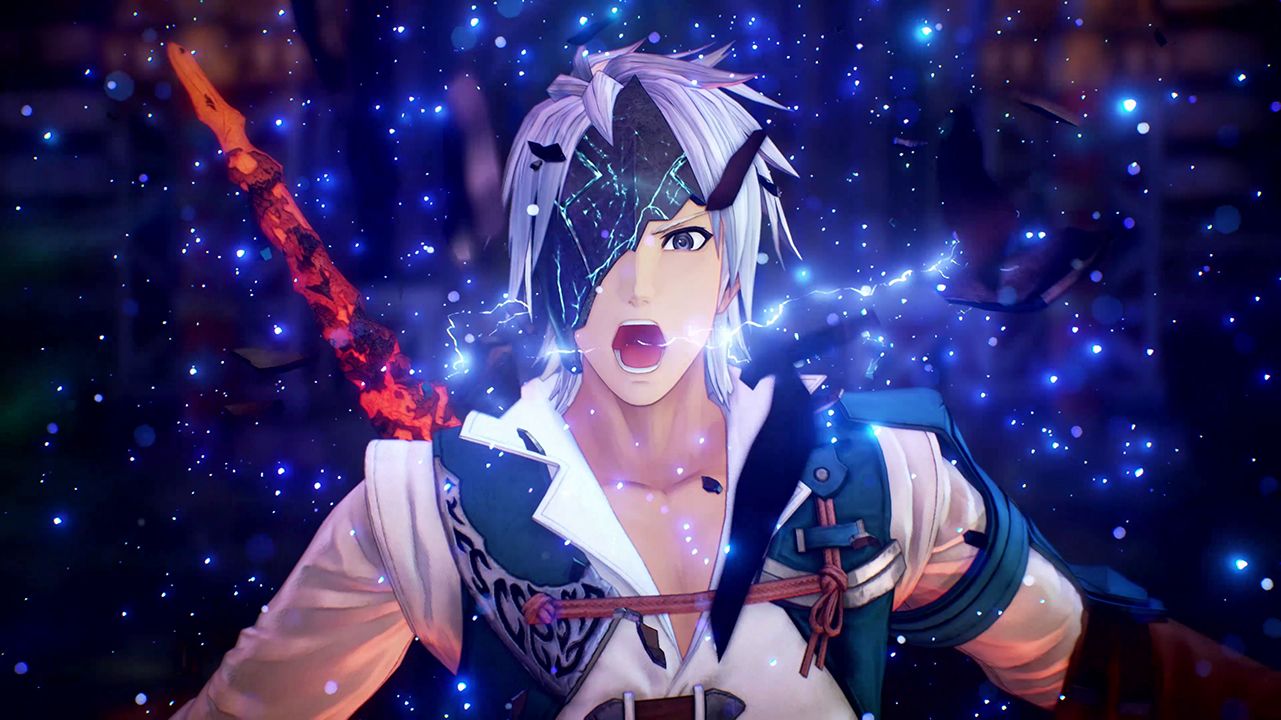 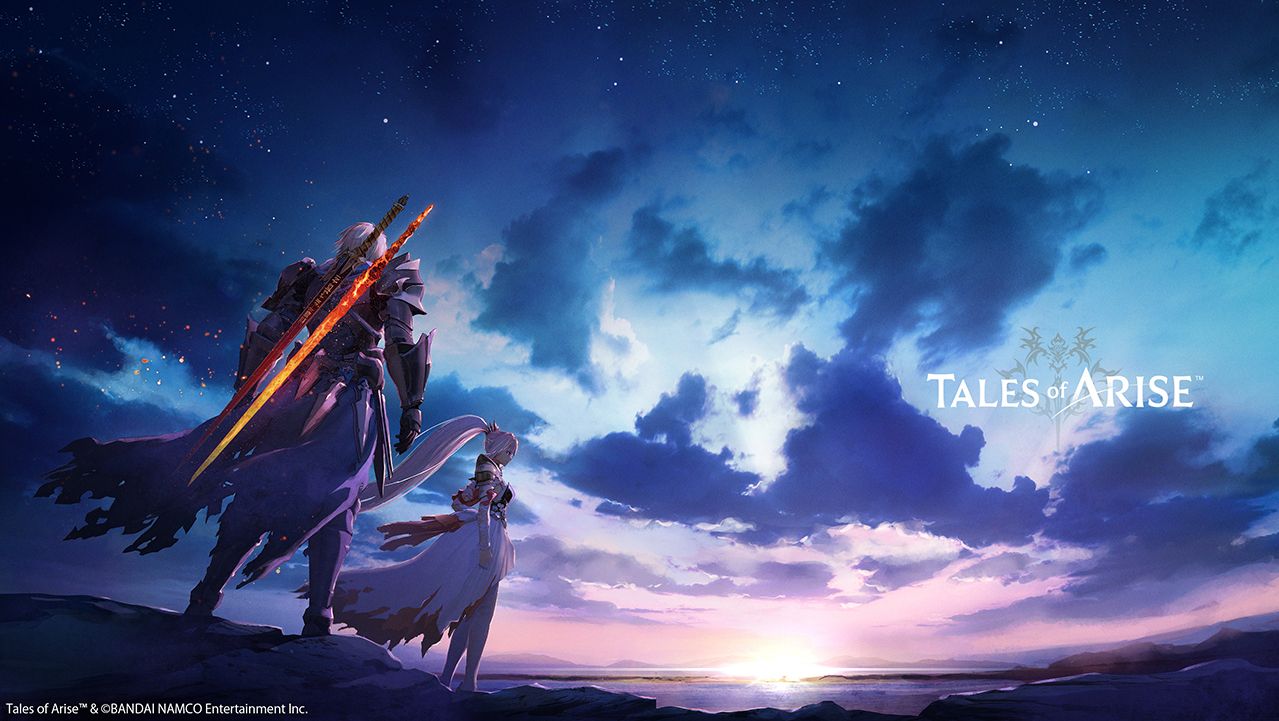 For everyone who has been patiently waiting for “Tales of Arise”