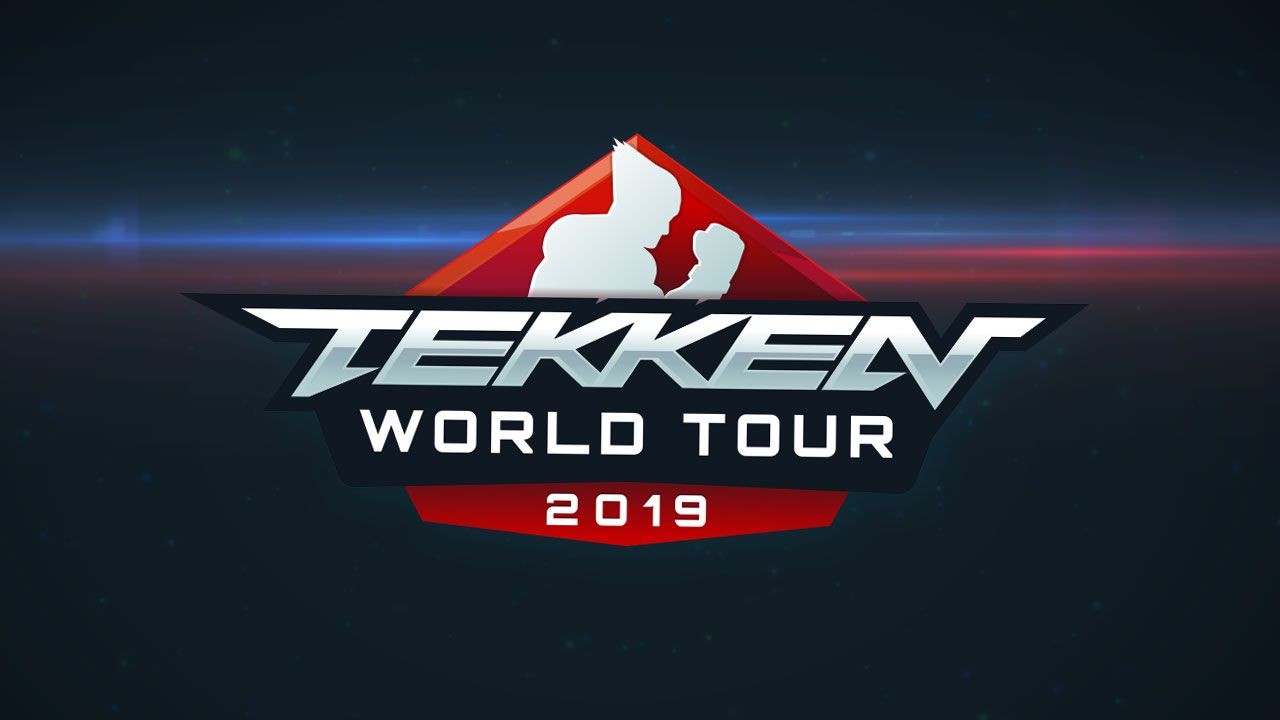 TEKKEN World Tour (TWT) is gearing up for another season; this time with new locations, returning favorites, and brand new ways to earn TWT Ranking Points!

In 2019, players will once again be able to qualify for the 20-player TEKKEN World Tour Finals by ranking up on TWT’s Global Leaderboard! Players will be able to earn the TWT Ranking Points they need to climb the Leaderboard exclusively at offline tournaments during the 8 month season. If they reach the Top 19, they will be invited to the TEKKEN World Tour Finals and join the Last Chance Qualifier Champion in Bangkok, Thailand!

After closing 2018 at the Theater Amsterdam in the Netherlands, the 2019 TEKKEN World Tour will be kicking off at the MIXUP in Lyon, France on April 20! The MIXUP is the season’s first Master event, one of TWT’s returning tournament categories. Speaking of Tournament Categories, let’s take a look at how players can earn Ranking Points in 2019!

Master+: TWT’s max value category is exclusive to the Evolution Championship Series, which is returning to the Tour in 2019! TWT’s single Master+ tournament awards Ranking Points to 1st through 49th place.

Since the opt-in system creates many new opportunities for Players to compete for Ranking Points in 2019, each tournament organizer may only apply for Dojo Tournament recognition once per month during the season. Additionally, organizers must use the opt-in system available on TWT’s official smash.gg league page for their tournament to be considered eligible. Organizers can find more details on how to create a Dojo Tournament [here].

Points earned at TWT tournaments are awarded according to a Player’s tournament results. Each placement at a TWT Tournament, from 1st at a Master+ down to 4th at a Dojo 16+, is worth a different number of Ranking Points. At the end of the year, TWT will be inviting the 19 highest ranked players to compete at the TEKKEN World Tour Finals. The Tour’s leaderboard is viewable on tekkenworldtour.com and via the TEKKEN World Tour league page on smash.gg. 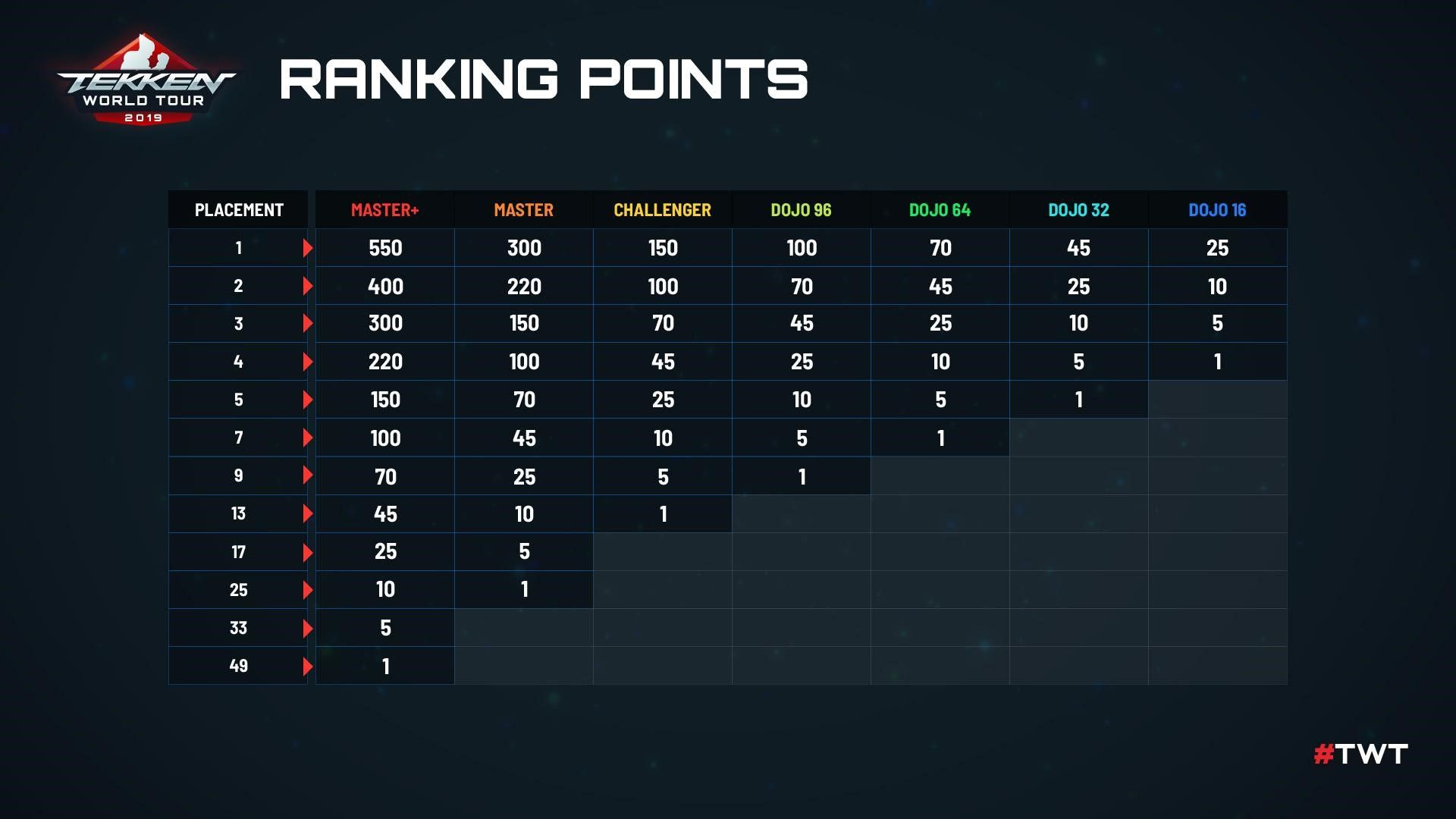 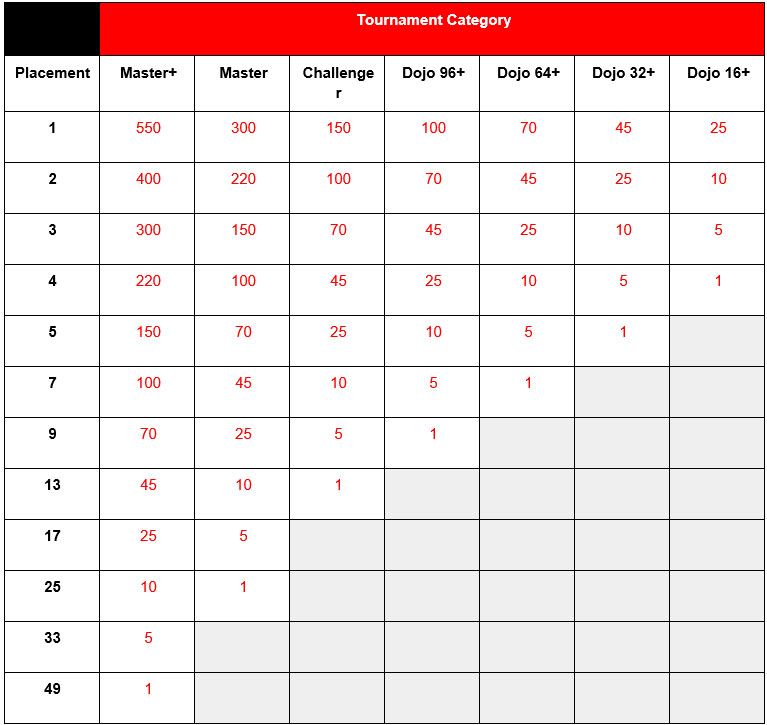 With so many ways to earn points this year, TEKKEN World Tour’s Leaderboard will be establishing a Player’s rank based on the total Points they earn from their 10 best tournament performances. TWT’s Leaderboard will recognize a Player’s best placements from 3 Master+ or Master tournaments, 3 Challenger tournaments, and 4 Dojo tournaments. Player’s can compete in as many tournaments as needed to achieve peak results, but once they have secured three 1st place Master or Challenger placements and 4 max level Dojo placements, no additional results in those categories would count towards their Rank. This also means that, for the first time, it is possible to have a perfect TEKKEN World Tour season.

Let’s see an example of what a perfect season would look like: 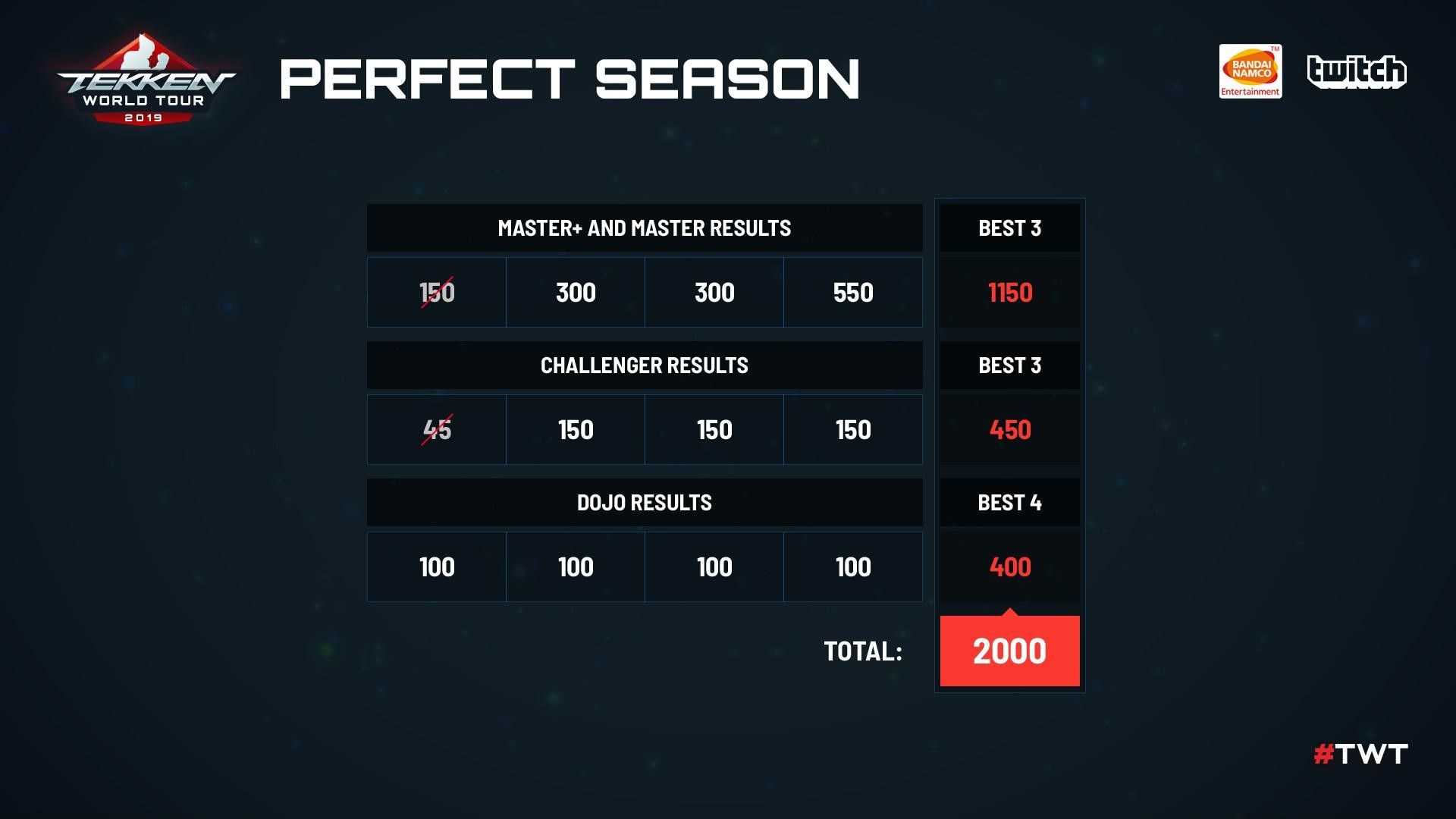 In the above example a Player competed in 4 Master/Master+ tournaments, placing 1st at three of them and getting 3rd at a fourth. They also placed 1st at three Challenger tournaments and 3rd at a fourth. Lastly, they won four Dojo tournaments with 96 or more players competing. The Tour only records the best three results from the Master and Challenger categories, so their two weakest performances were dropped from their Final score. Since one of their placements was 1st at the Evolution Championship Series (the Master+ tournament), their total score reached the maximum total possible of 2,000 Ranking Points.

With the introduction of the Dojo tournament category and 2019’s revisions to how player rankings are calculated, we are hoping to see even more players worldwide engaged with TWT. The new Ranking system, and its potential for a perfect season, is being activated with the goal of reducing travel fatigue seen in players traveling unnecessarily after achieving top placements at tournaments. We value TEKKEN players around the world and are continuing to refine TWT in ways we believe keeps their interests at the forefront of the Tour. 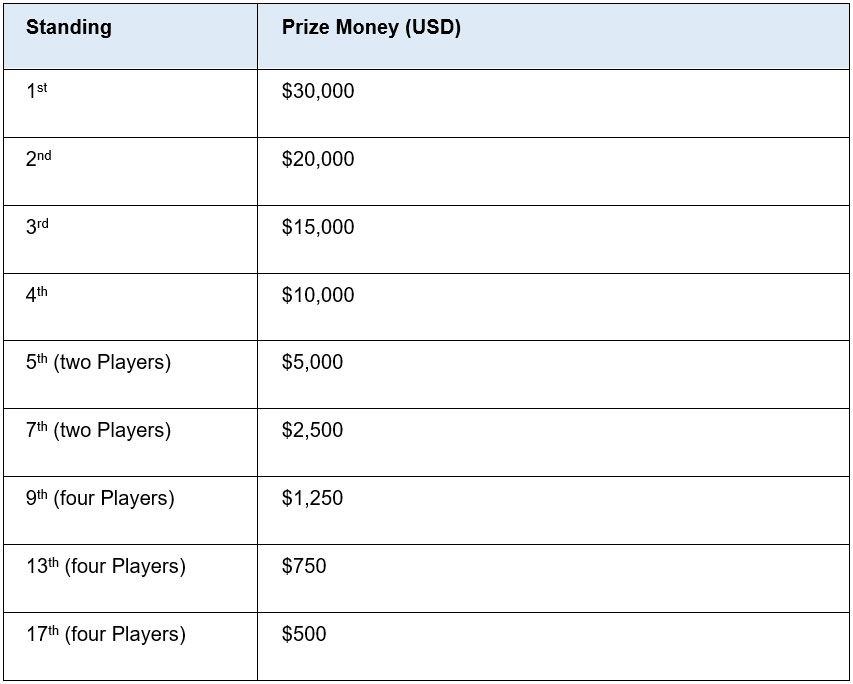 Once again, TWT has no overlapping Master+, Master, or Challenger tournaments during the season. While tournament dates are subject to change, TWT’s schedule should maximize your opportunity to strategically compete across the globe (and close to home). So Get Ready For The Next Battle! 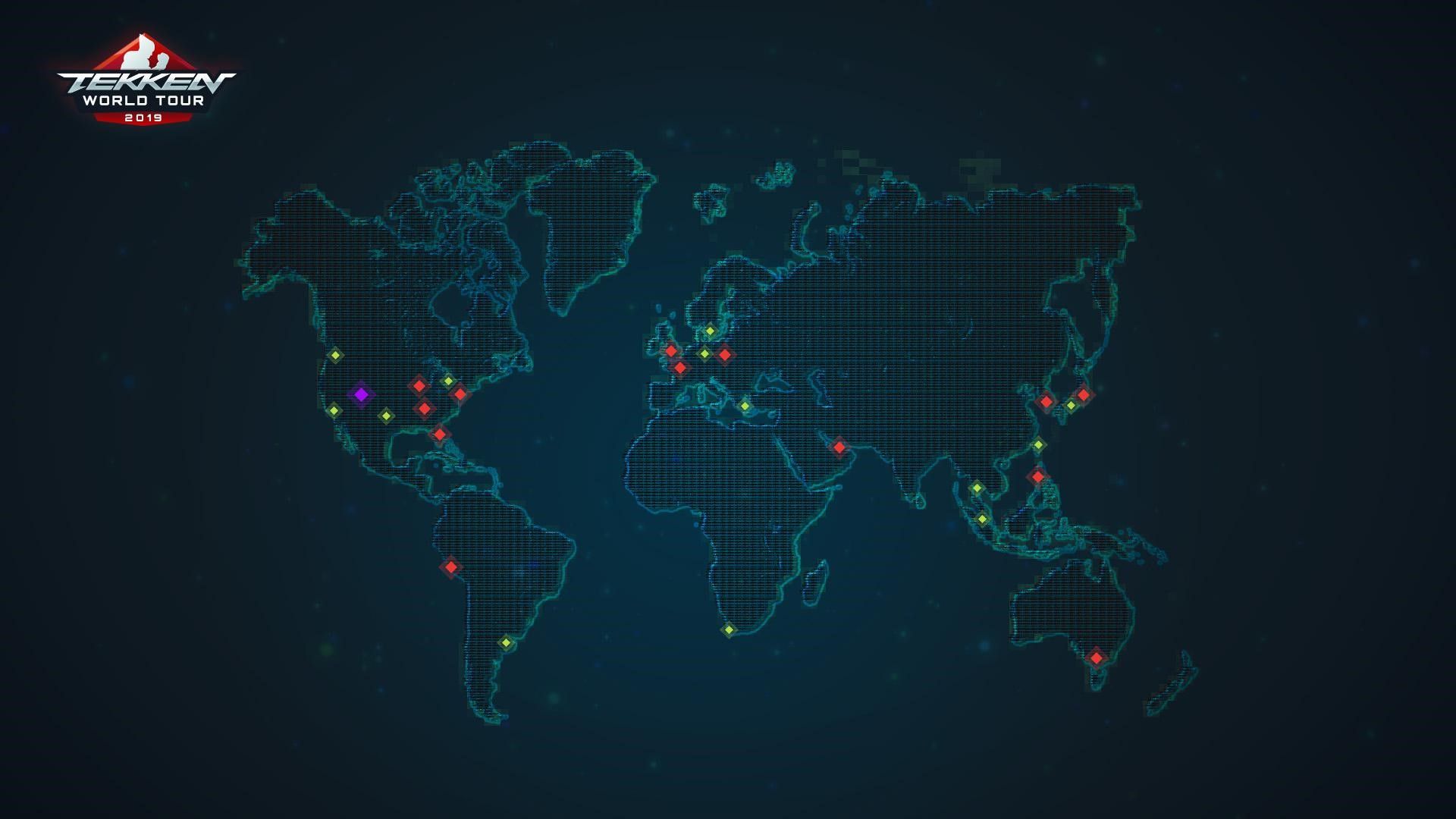