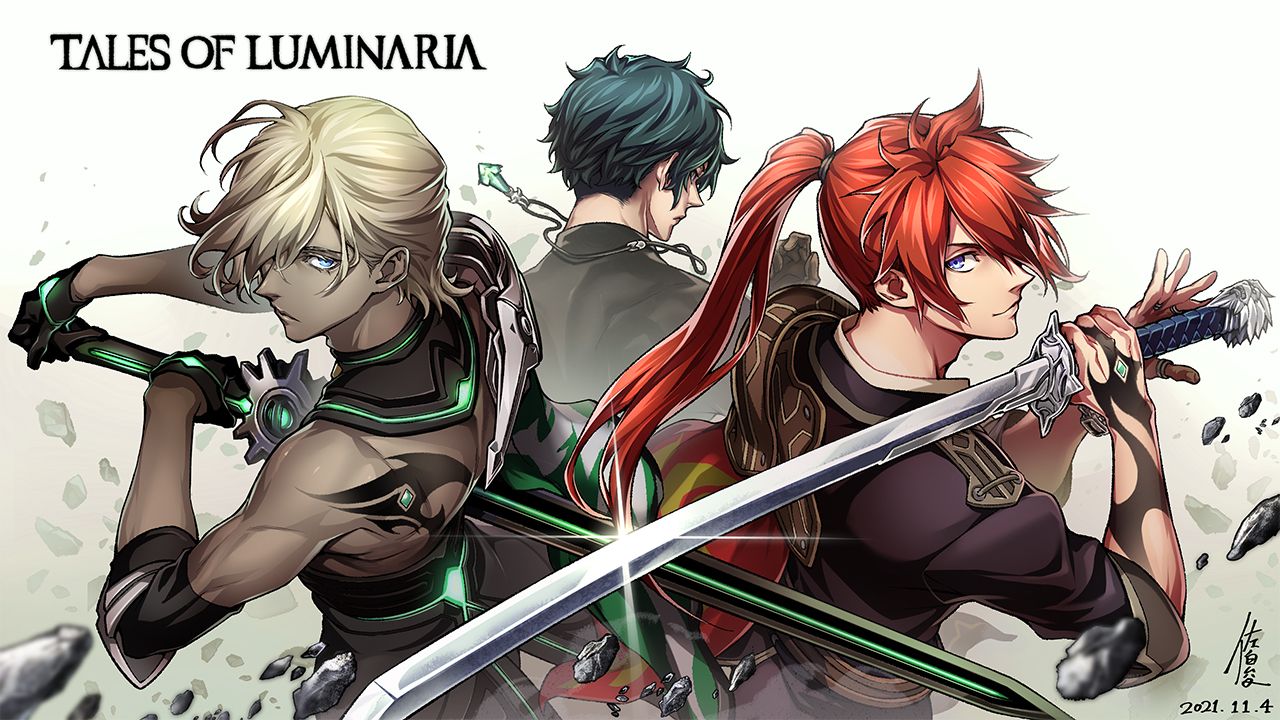 Thank you all for playing Tales of Luminaria.

Since the launch of the service, we have received many encouraging comments from players, but we have also received comments as well, mainly regarding the UI and operability. We apologize for not meeting your expectations.

In this letter, we would like to explain both the core concept of the game’s design and the issues you are having, which we have received a lot of feedback about, as well as our plans for future improvements. And finally, we would like to give you some tips on how to more comfortably play the game as it is right now.

The Game Concept of this Title

First, we wanted to discuss the camera work, which has received the most comments. There was a lack of explanation of the camera specifications in advance. We would now like to take this opportunity to explain those specifications and our intentions for this game.

For some background, the goal of this game’s design is to maximize the convenience of a smartphone game that can be played anywhere, while at the same time allowing players to control the characters easily and experience a compelling story and exciting battles. We wanted to create a smartphone game where any player could enjoy a true character-based RPG experience at any time and place, from those who are too busy to take large blocks of time, to those who want to take their time as they play. We aimed for it to be a game where, even on the small screen of a smartphone, you can feel characters’ actions and expressions close to you, and above all, you can enjoy the sense of adventuring with them through the game’s rich, deep scenery.

In order to realize this concept, we designed the game so that you can focus on the story, conversations, and action-packed battles while maintaining the convenience of a "portrait smartphone game" that can be played anywhere. In order to make it possible for players to follow the story and play through the beautiful map in a casual, one-handed manner without having to look around with a camera, we decided to make it so that the story progresses as you move deeper towards the background, which the camera is always pointing towards.

Along the way, there are side paths with items at the end of them but choosing whether to take those side paths is meant to be an optional sub-element of gameplay.

About the Current Issues

However, contrary to that concept, we recognize that there is a lot of discussion from players that it is difficult to understand the gameplay intent of "heading towards the background is the main goal and the side roads are a sub goal" and that there are situations where you are forced to search in the horizontal direction, which is difficult to see. We also recognize that in battle, it is difficult to fight enemies that are off-screen to the side or in the foreground, and that it is also sometimes difficult to collect items. We will work to resolve these issues as soon as possible and make a sincere effort to revise and evolve Tales of Luminaria into a game that truly allows players to focus on the fun of "a portrait smartphone app that can be played anywhere, but that also offers a full-fledged character RPG story” as we intended.

In addition to that, we are also working to address problems with the “inconvenience of an unfamiliar main menu UI" and "lack of tutorials" with high priority. We hope you will be patient with us as we work diligently to fix all these types of inconveniences, including all the related minor details, as soon as possible.

In addition, we have received many comments that are unique to the overseas version as well, and we will do our best to reflect them in the game. Please keep sending us your comments, as we'll continue to refer to them for our future updates.

So now, let’s discuss the first set of updates, which are coming very soon.

Functions to be Improved Soon

* Some of the following improvements will be included in the upcoming update ver. 1.0.6.

The Attack Button’s design will be changed to make it easier to understand that it is used for both movement and attack. Additionally, the initial size of the button will be revised.

We have received lots of feedback from players that play on tablets that the attack button is difficult to reach, and also that players frequently unintentionally dodge. Therefore, we will add and change the following in the Options screen to help address these issues. 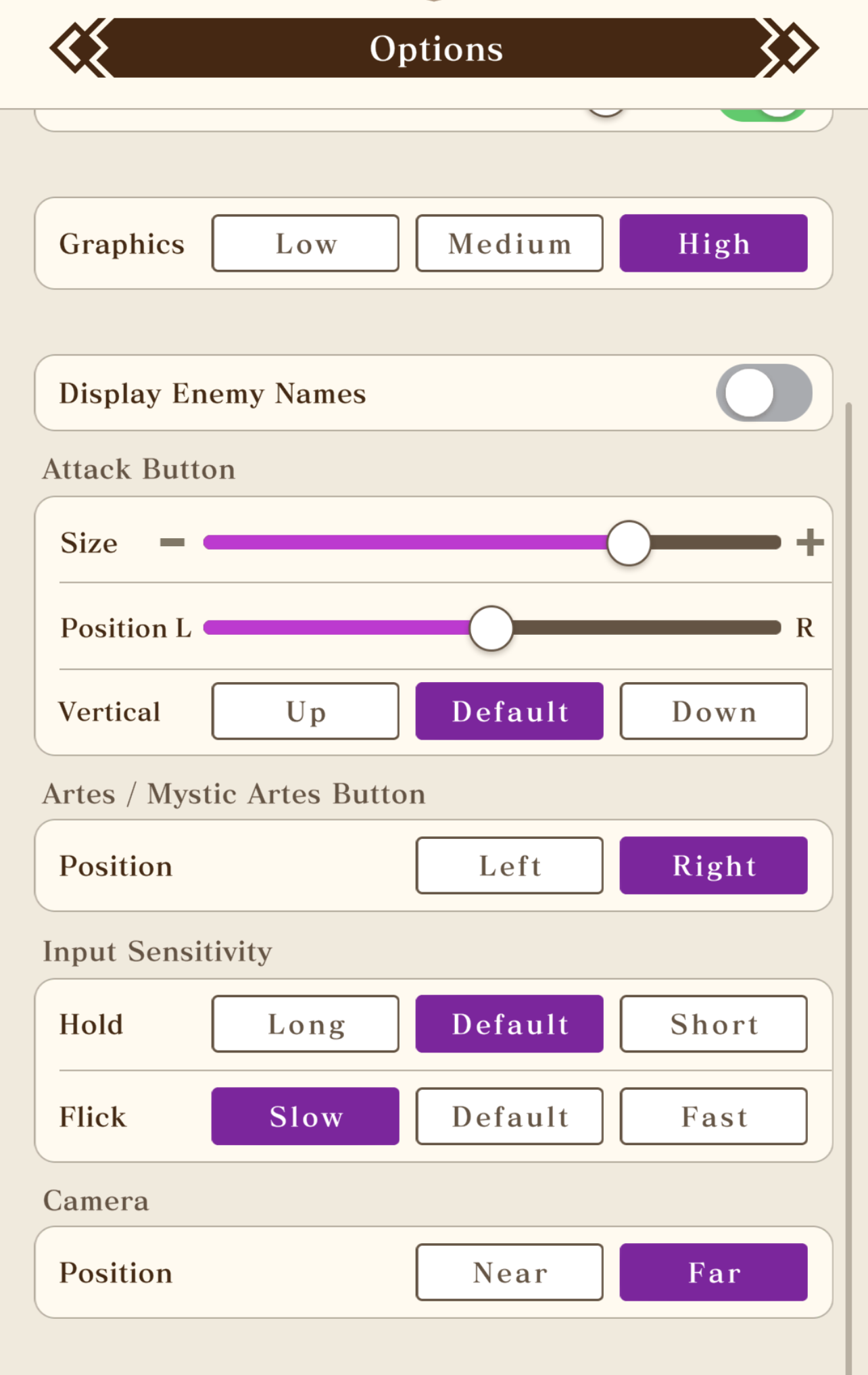 * You can access these from the Pause Button in the upper left corner during an episode.

A standard function to attract items near your character will be implemented. In addition, some of the 4-star weapons that you have from the start have an Arte called "Gathering", which attracts items from even farther away, so please check the Arte setting on the character screen.

Leo ep.1 also serves as a tutorial for basic gameplay, but since it currently requires too high a level of skill before having gotten used to the game, we will reduce the initial difficulty.

Also, once you make it partway through the episode on the road to town, you will receive the “Blaze Formal Dress (Leo)” Equipment, which will allow you to activate his 5-star Mystic Arte. If you use this Mystic Arte, you will be able to enjoy controlling Leo more comfortably. 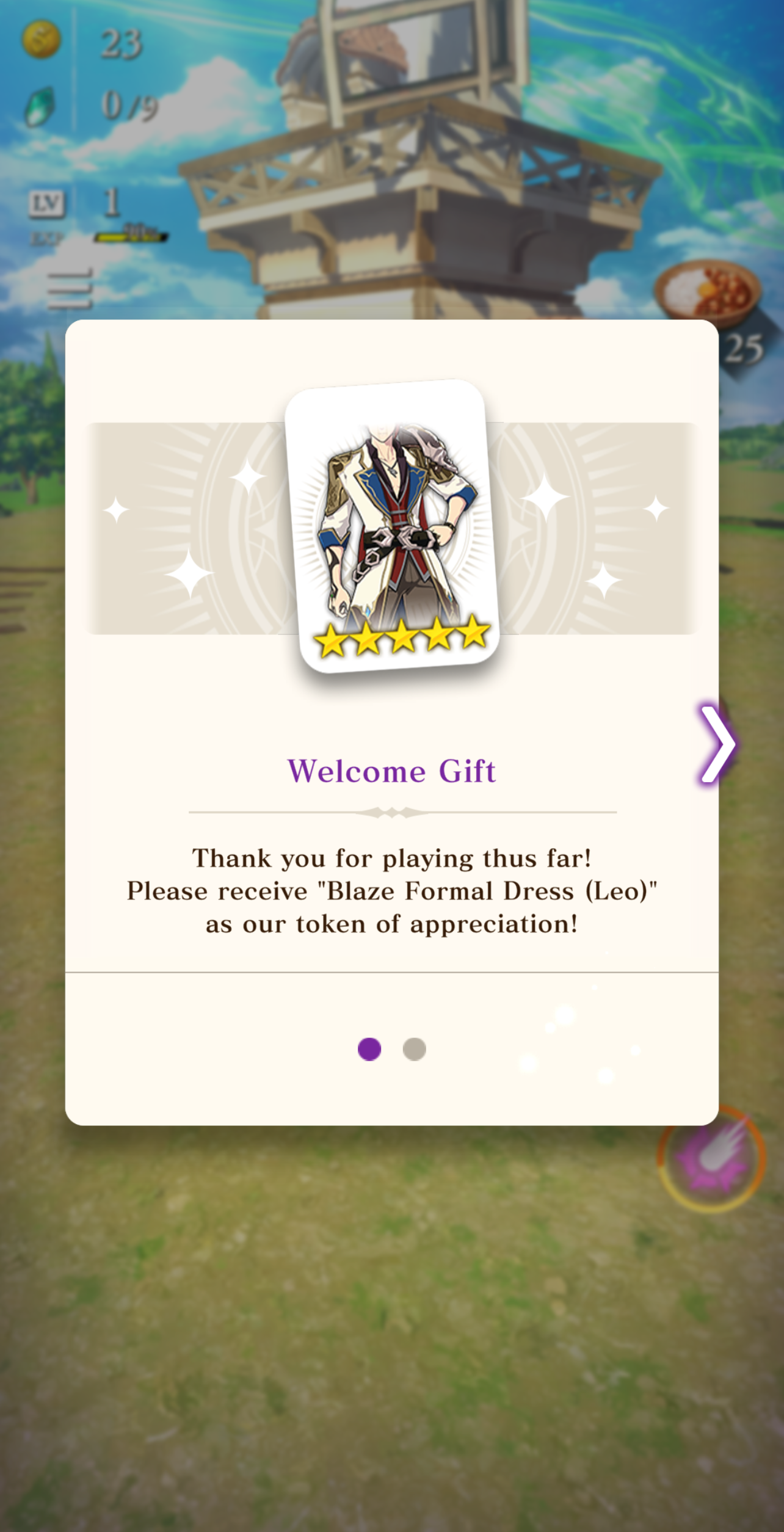 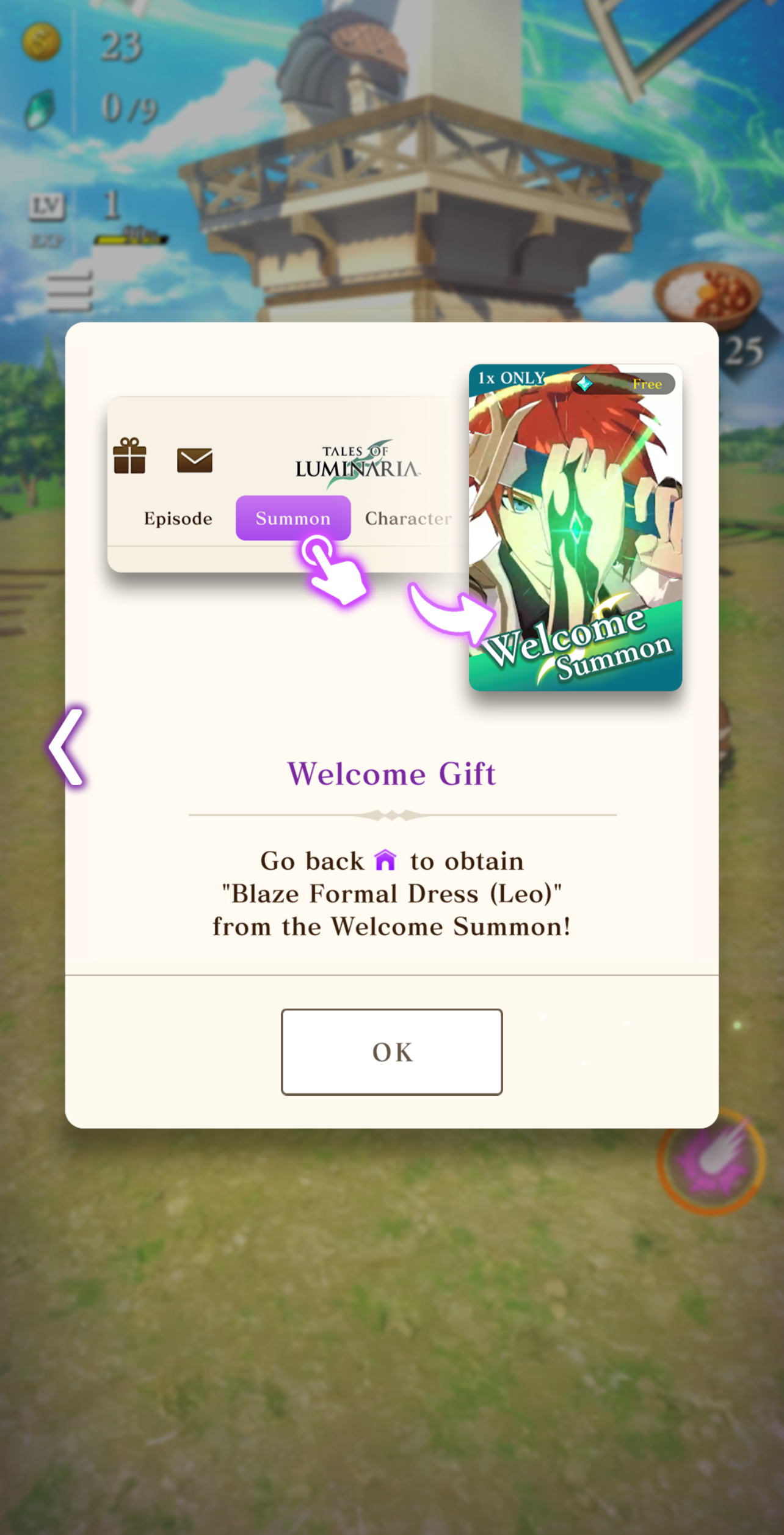 * Players will also receive this item if they have already completed the episode.

* 5-star Mystic Artes can be activated by equipping the 5-star Equipment on the character screen.

The unlock condition for Celia, August, and Alexandra’s episodes 1 will be moved up from clearing Leo ep.1 chapter 4 to clearing chapter 2. We hope that this will allow players to enjoy the range of drama and action in this title by experiencing the episodes of multiple characters earlier on.

Improvements to the Main Menu UI

The "All" tab displays unlocked episodes, acquired equipment, and other items in order of recommendation. The tab is meant to allow you to select items in order from the top without having to think about it much. However, since this is the first screen players see, it can be overwhelming, so we will improve this tab’s display items so that it is easier to parse.

The Summon buttons that are scattered throughout the "All" and "Equipment" tabs will now be gathered in a new “Summons” tab for better understanding.

In addition to everything listed above, we are also continuously discussing how to address other important gameplay issues we are hearing from you – such as horizontal movement while exploring and the stress of off-screen enemies during battle – while staying true to our core concept. We hope to update you more on these improvements in the coming days.

As said above, we apologize for any inconvenience caused to you, our players, as we work to improve the functionality of the game in response to your feedback. That said, we would like to share some points that we hope you will find useful operating the game as it is currently.

Enemy attacks may display a “Red Attack Predictor” on the ground before they occur. When an attack is predicted, move to get out of the way, or flick to dodge it if you can't run out of the way in time. Also, you will not take any damage when you activate your Mystic Arte, so it is also a good technique to save your gauge and use that when the time comes. If you are having trouble getting around enemies, we hope these points will help.

In the character screen, in addition to Equipment, Mystic Arte and Arte settings, the episodes and dishes and missions related to that character are displayed in the "Recommended" section at the very bottom. You can also use this screen as a starting point to navigate to your desired location in-game, so we hope you find it useful.

Thank you for reading all the way to the end. We assure you that we will continue to listen to the voices of our players as we strive to operate this game with earnestness and sincerity.

Thank you again for your continued support of Tales of Luminaria.

- The entire Tales of Luminaria Team 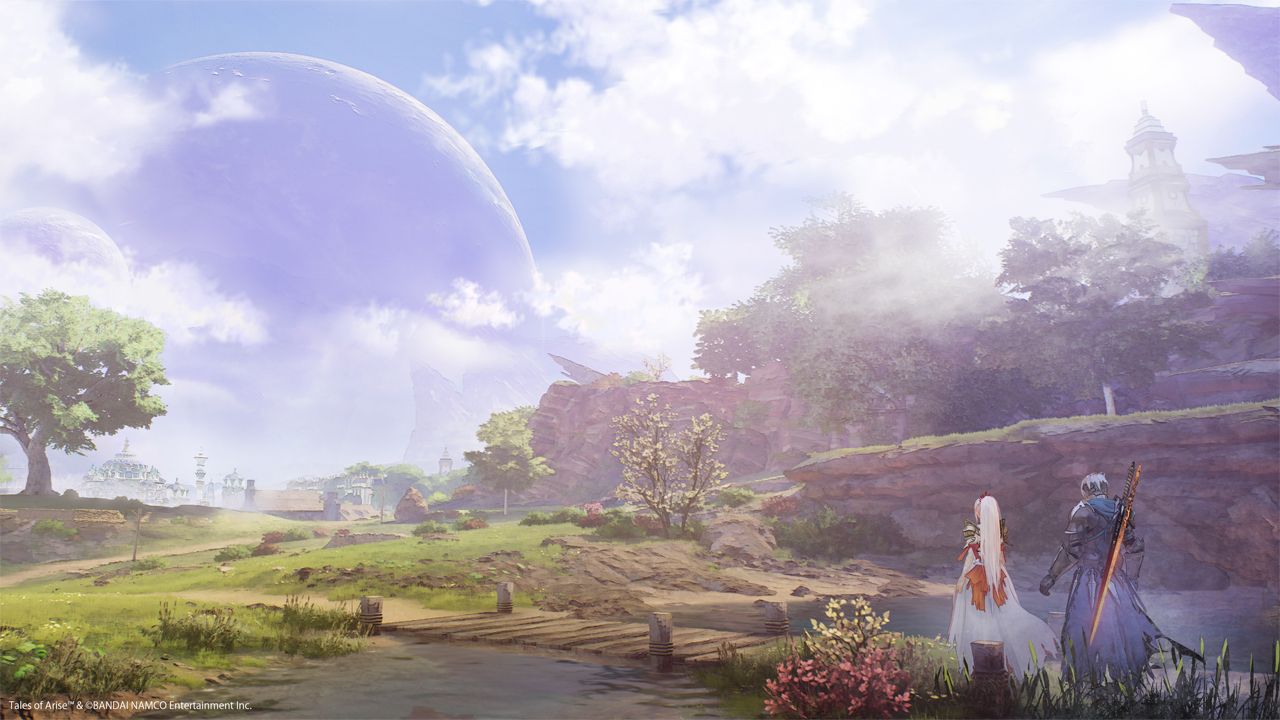 Tales of Arise: How to reacquire the trophies in the PS5 version 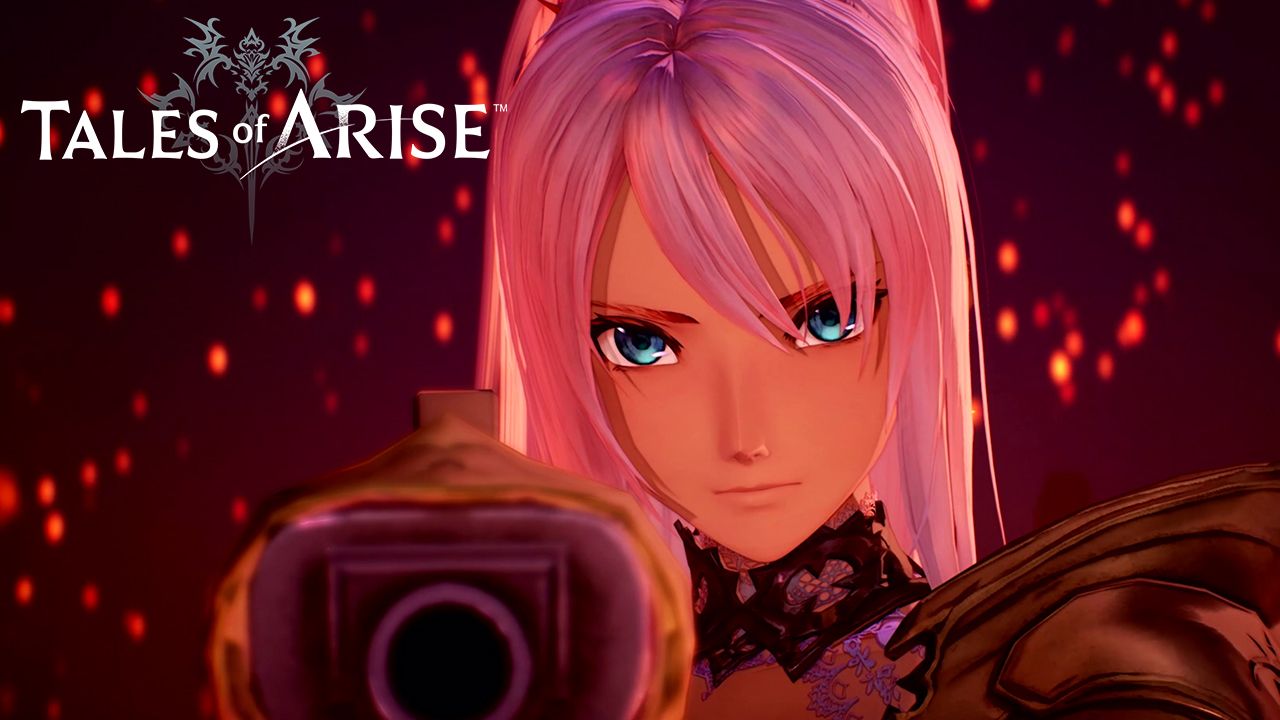