As the Others are cruel brain-craving monsters that are impossible for humans to communicate with or tell what they are thinking, I designed them to look as though they lack any high-level emotions or thoughts. However, simply having them attack mindlessly would be dull; I added some “absurdity” and unique habits to every one of them as a counterpoint to their “frightening” nature.

Also, as they are designed to be enemies in an action game, I created unique “habits” for each of them so that they would be fun to fight and would portray this “absurdity” perspective in their designs. You can check them out in the descriptions in the Enemy Compendium.

SCARLET NEXUS’s world is inspired by the prospective “near future” of our modern world, and the Art Director, Mr. Ochiai, came up with the theme of “foreignness” while deciding on the enemies in this world. Of course, this “foreignness” theme is not just applicable to the enemies but also to the world perspective, world locations, characters, etc., so I felt very confident and reassured that I could fully utilize my uniqueness and characteristics as an artist.

Initially, the enemies were planned to be created to be more colorful and anime-styled so that they would blend into the surroundings of the world, but based on the theme of “foreignness” and the fact that humans and Others are completely hostile entities, we decided to emphasize their current surreal and artistic looks for visual impact.

I believe that the reason why the Others, which exhibited the purity of my creativity, were able to “coexist” with SCARLET NEXUS’s world settings was because Mr. Ochiai’s sense of “beauty and ugliness” was very close to my own. Even though we created the world and the Others using entirely separate processes, I still think they coexist well together.

On the other hand, as the Others are enemy characters in the game, there are often specific requests for their movements and backgrounds from the devs. That means there are some limitations on how the Others can be designed; however, they always tell me to “feel free to do whatever you want with the design” so I won’t feel overly limited when creating them. Also, they are extremely good at translating my designs into fightable enemies in the game, which I am very impressed with.

Vase Paws is the Other I designed before I worked on Buddy Rummy, and it was designed to look like a non-living creature, so I shifted the design direction to differentiate the two from each other.

The design direction I took is that “it would fit in with its surroundings” and “something that seems like it could be found anywhere,” which is why it kind of resulted in being an animal-themed Other.

Beyond that, the animal I decided to use was a human, and in order to add “foreignness” to the design, I decided to eliminate its knee joints. The result was spectacular because no matter how it moved around, it had to move awkwardly and was perfect as an Other.

Buddy — represents this Other’s habit of shaking hands with others of its kind but eventually ripping them off.

Rummy — represents its unsteady walking with its legs without knee joints. 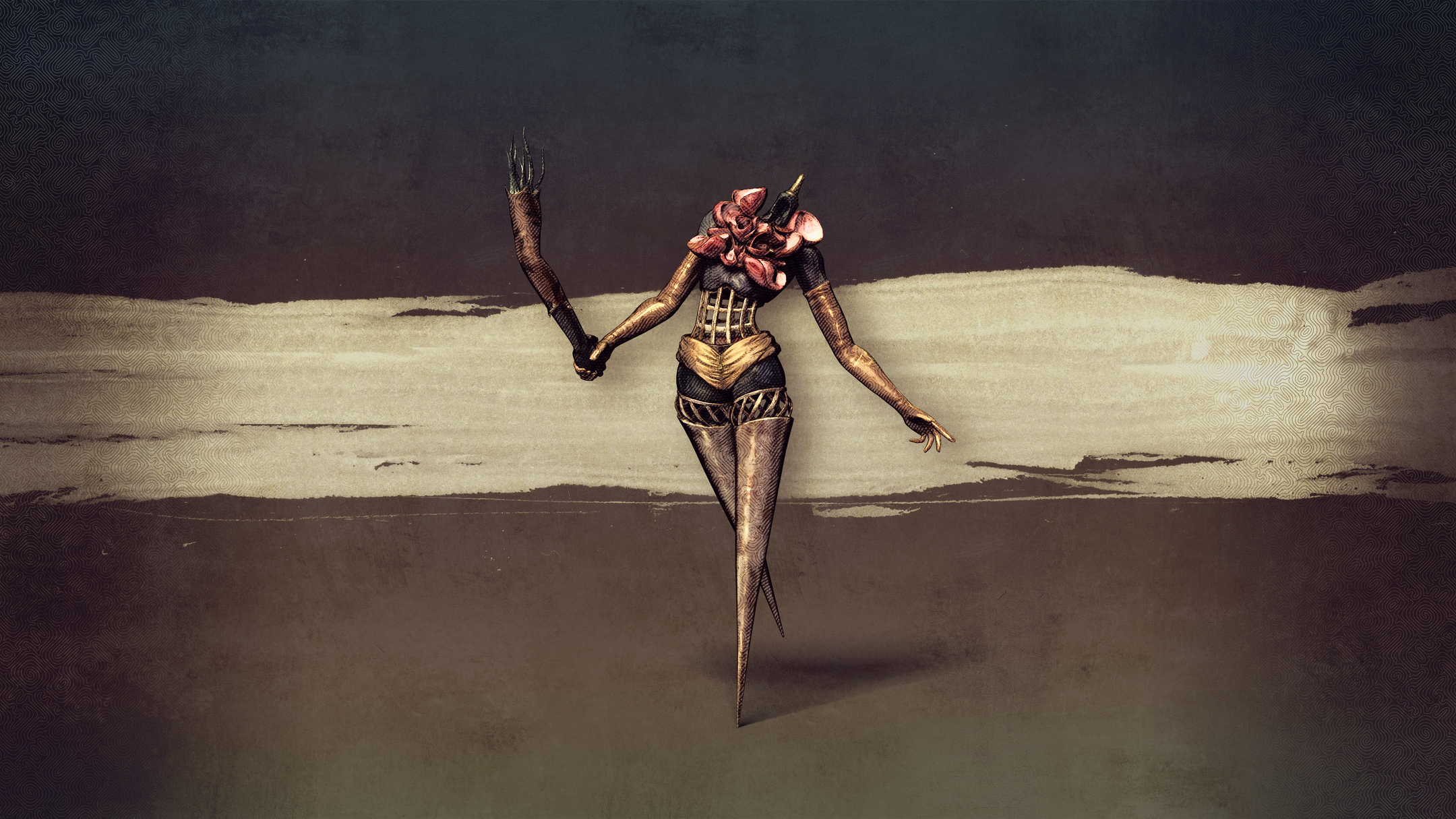 The first-ever Other I designed. When I first joined the project, this was one of the first artworks I was asked to create, and it was created as a really solid artwork instead of a draft to show the devs what I had in hand.

The combination of having “organic” and “non-organic” components in the formulation of the Others matches my art styles very closely, so it is like a compilation of the tastes of all my illustrations and artworks.

Initially, I assumed that liquid would constantly leak from the faucet on its face, forming damage-inflicting puddles, and it would walk with its fingers to avoid touching the puddles. But ultimately, the leaking was changed to the enemy directly spraying liquid around and onto the player; its “habit” of being a “clean freak” can still be found in its 3D motions.

Winery — represents the outflowing liquid from the monster’s faucet that resembles wine.

Chinery — represents the “chine” that connects its head and lower body. 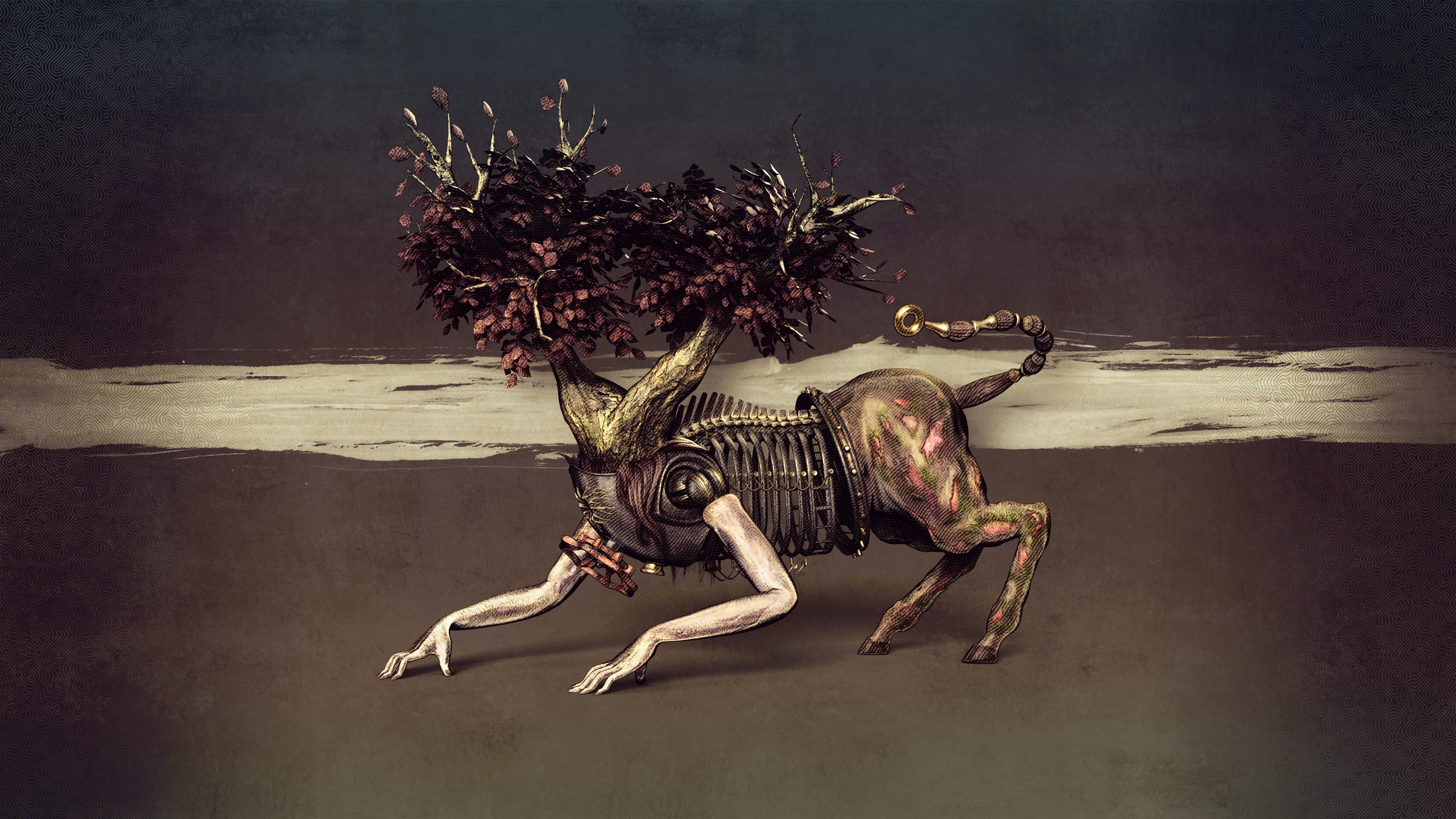 Also, the “plants” on the Chinery’s head were scaled down and used as the upper half of this Other. On top of that, to add some elements of the culture of humankind and some “absurdity” into its design as an Other, I decided to let it wear heels.

This is also an Other created at the start of the project, so they have similar atmospheres but are further modified in size and attack movements according to requests from the devs.

Vase — represents the body part that resembles a vase.

Paws — represents the huge and unique legs of the Other. 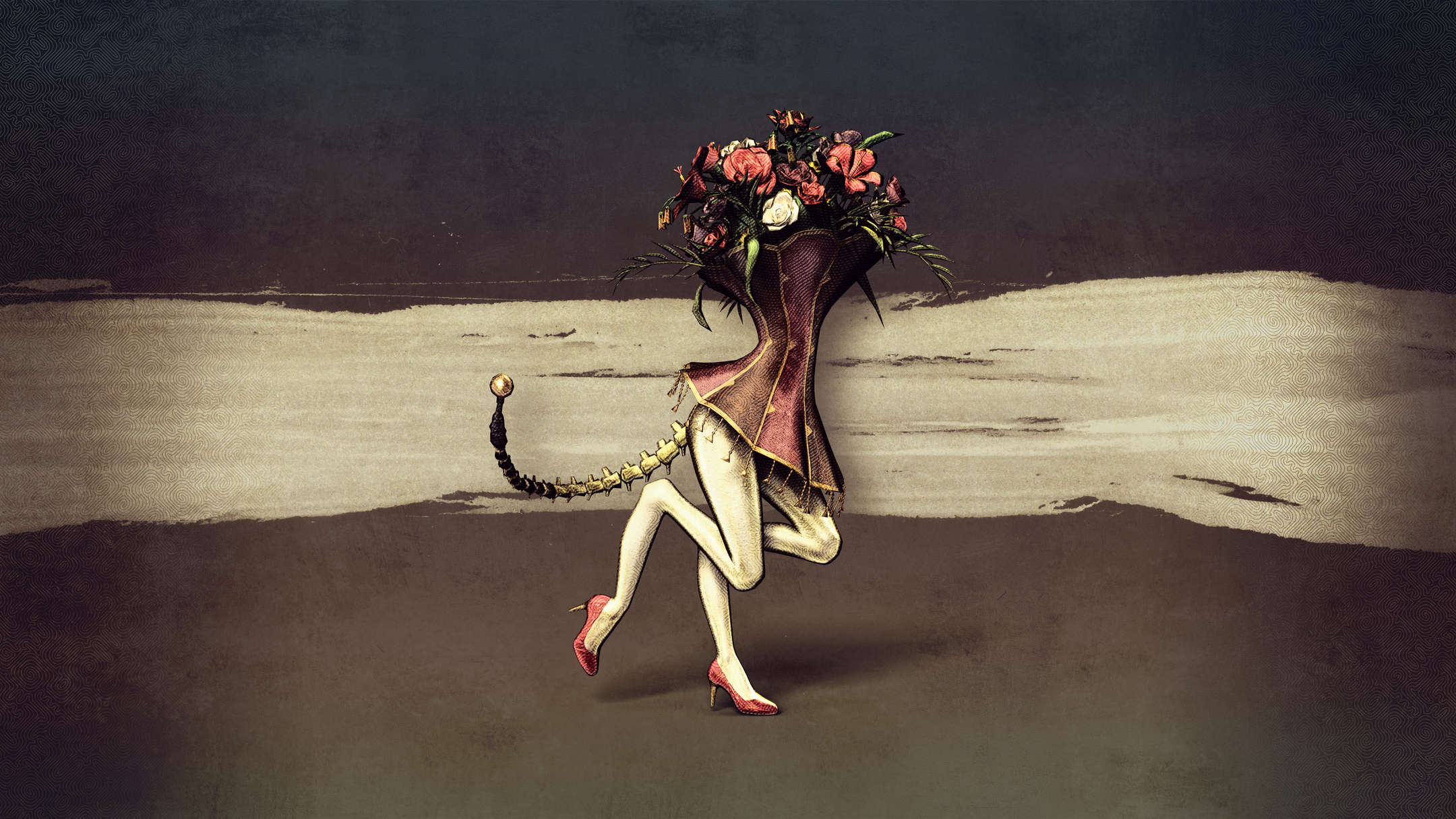 The first design draft for this Other was actually the only one rejected by the Art Director, Mr. Ochiai. I attempted to differentiate this Other from other normal enemies, which made its design much different from the intended design direction for the Others. It also lacked my own unique artwork styles, so I was actually happy that he was sincere about that, and we could finalize the current design we were satisfied with.

The design is based on the request for playability from the devs, insofar as they wanted the player to destroy its water tank to achieve the Soaked ailment. That’s why its design is based on a mop and a fish tank, with hands and a head added into the mix. To incorporate the “emotionless” Other characteristic, you can also see that I designed its head to look like it has zero emotions.

Dispense — represents the spraying of water from its hoses.

Fisher — represents its resemblance to a fish dealer, while carrying a fish tank on its back. 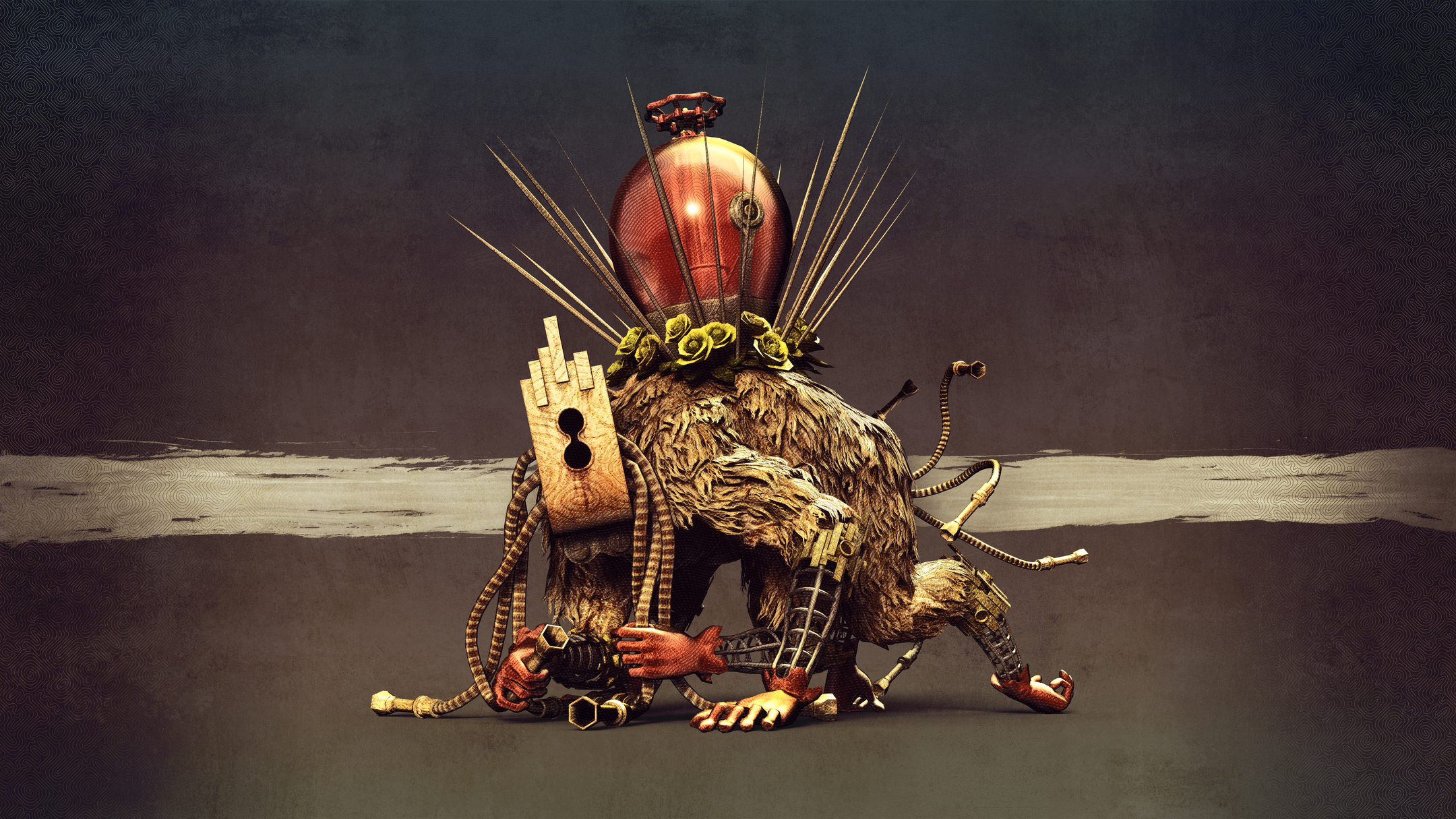 This Other was designed to have an animal theme. It resembles a crocodile, so its head greatly shows this characteristic. However, as they are Others rather than ordinary monsters, I needed to make sure we incorporated the “non-organic” design theme; that’s why it currently has a metal mask on its head.

The game design documents defined it as an Other that liquefies the ground in order to bury itself in, and I thought it was a little bit too surreal and fantasy-like. I decided to give it the ability to liquefy itself as well so that it would make more sense in terms of its background settings.

You can see a lot of light-bulb-shaped parts on its arms. They are added to clearly indicate its weaknesses, as many different elements are mixed into its design.

The light emitted by the light bulbs was used as one basis while designing the brain crush organ of the Others. 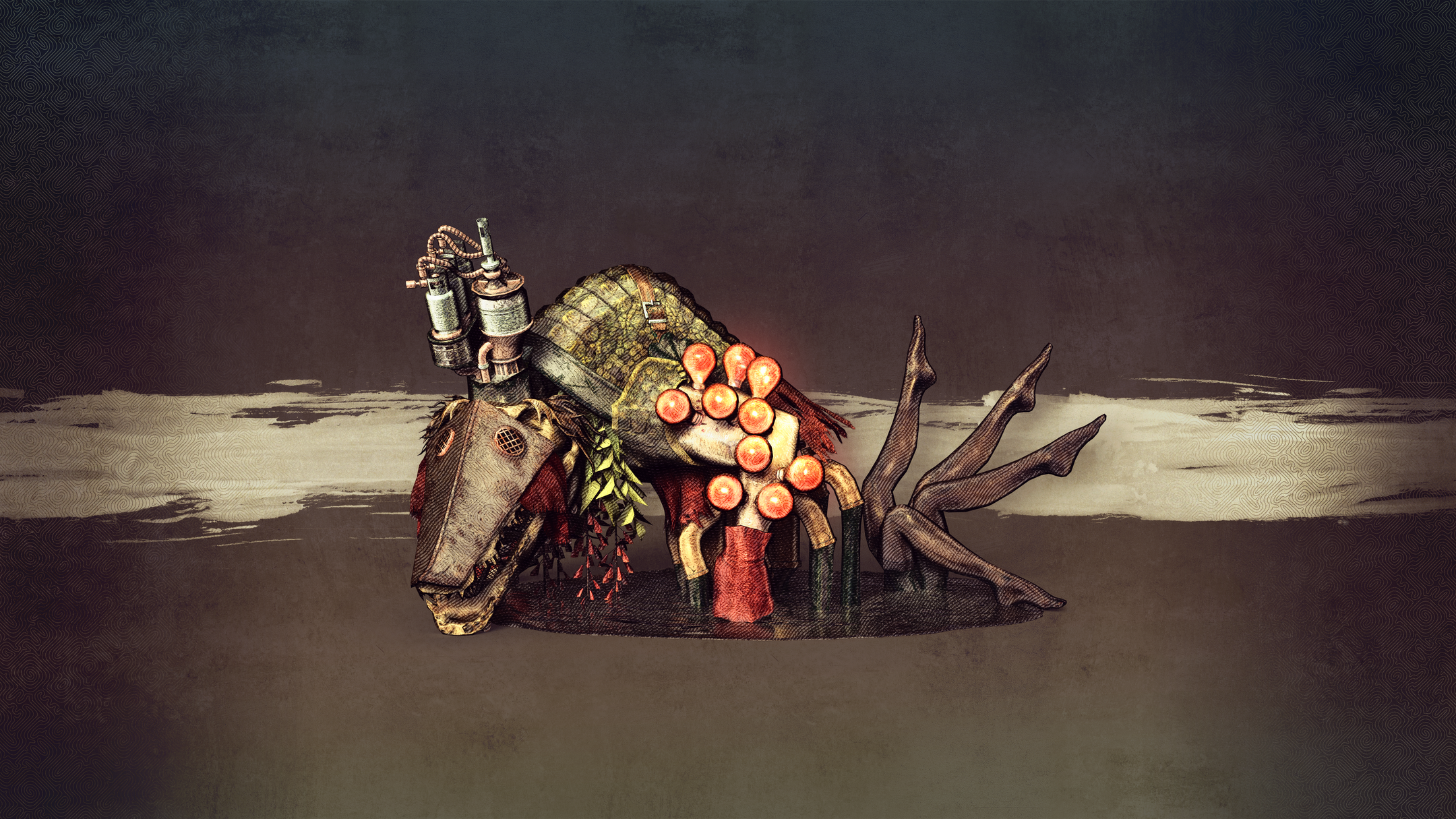 I gave it the “Santa” name at first sight when I knew it would be throwing things around. As I also needed to design its habits, I first came up with some irrational ideas in terms of gameplay and development difficulty, such as destroying things around it or interfering with other enemies. Ultimately, to be more realistic, it ended up being an enemy entity with two of its kind. Its box-like body part and sleight-of-hand movements are designed with “humor” in mind.

Barrista — an original word created to represent its throwing actions and the two Others facing each other, resembling “ballista” and “barista.” 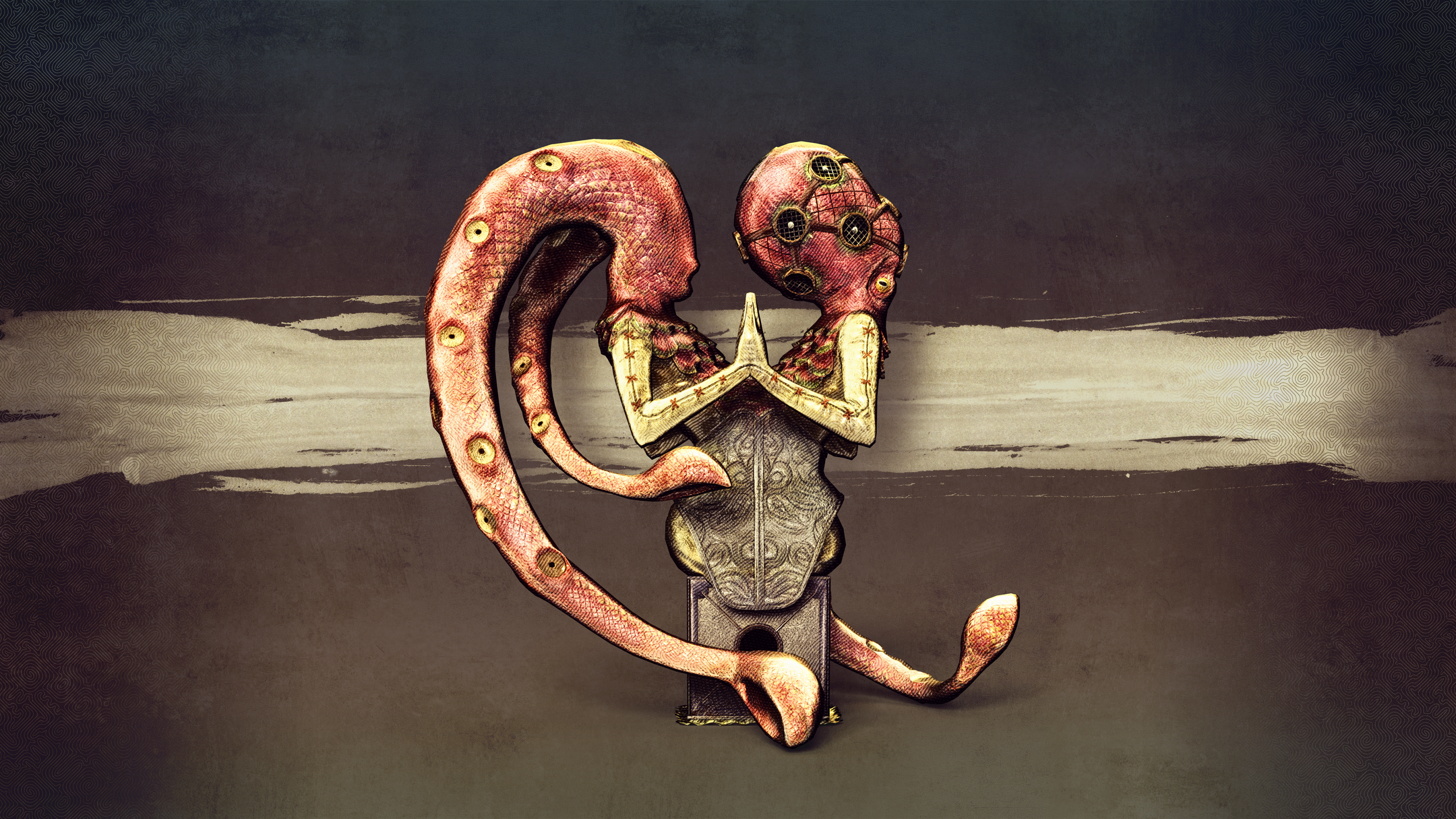 It was one of the designs drafted at the start of the project. It had a glass casing body, wings, and a human body, but its parts were later adjusted to suit its playability. The inspiration for this Other came from a video I watched about headstands.

Although it had a human-like upper body and a human head, I needed to eliminate its looks of emotions and thoughts, so I clipped the upper half of its head and replaced it with a pincushion.

Bandeau — represents the strap surrounding its body that resembles a garment.

Pendu — represents its appearance of being hung upside-down. 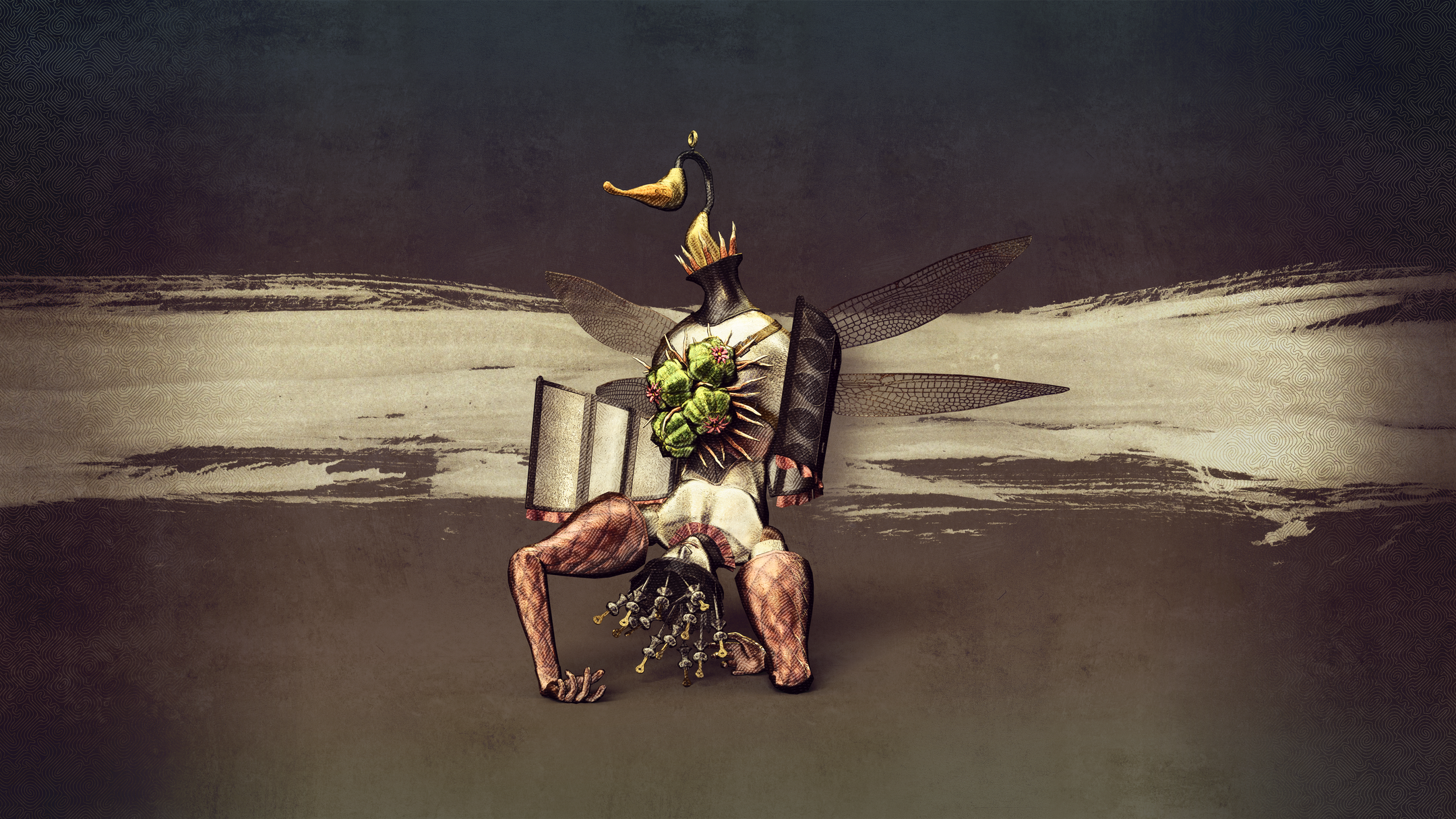 There actually was one particular Other that was created by the dev team at Bandai Namco Studios before I joined the team. That means this Other was the only one created in “collaboration” between the team and me.

It was initially called a “Goat-type” Other, had hay-like hair, and wore a corset. It gradually transformed to have metal scraps as its limbs and a cloche as armor to protect its weakness.

The Sabbat-type Others have really straightforward designs like the Rummy-type ones, so players can probably tell the difference between them and others just by looking closely.

Sabbat — represents the head that resembles the demon/spirit Leonard, which is also known as the “Sabbatic Goat.”

Wither — represents its hair, which resembles grass withering away. 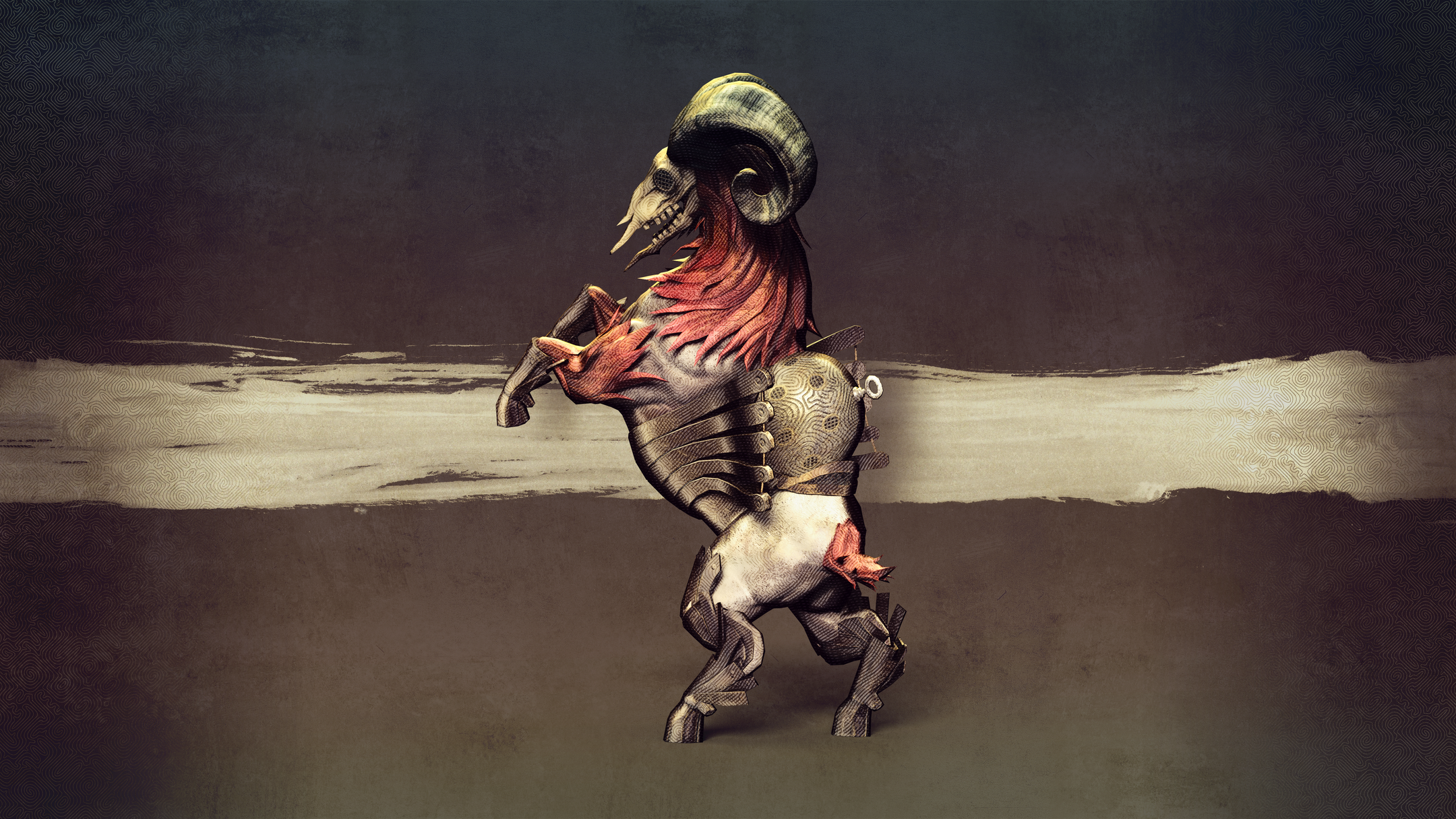 The lower body pedaling a unicycle is its main body part. It spins around on the “ground” and is completely unfair as the player can’t interfere with it in any way.

It is the ultimate and strongest Other in the game, so I designed it to have the appearance of inanimate objects and (religious) icons instead of some kind of living entity. Of course, the “absurdity” element is also fully incorporated into its design.

Regarding the balance of its “frightening nature” and “absurdity,” I pushed the limits for the latter as this is the final Other boss, and I needed to further promote its “foreignness” and the “seriousness” of the story at that point.

Dominus — represents its existence above all the Others.

Circus — represents its body parts, which resemble circus-like elements such as elephants, unicycles, and such. 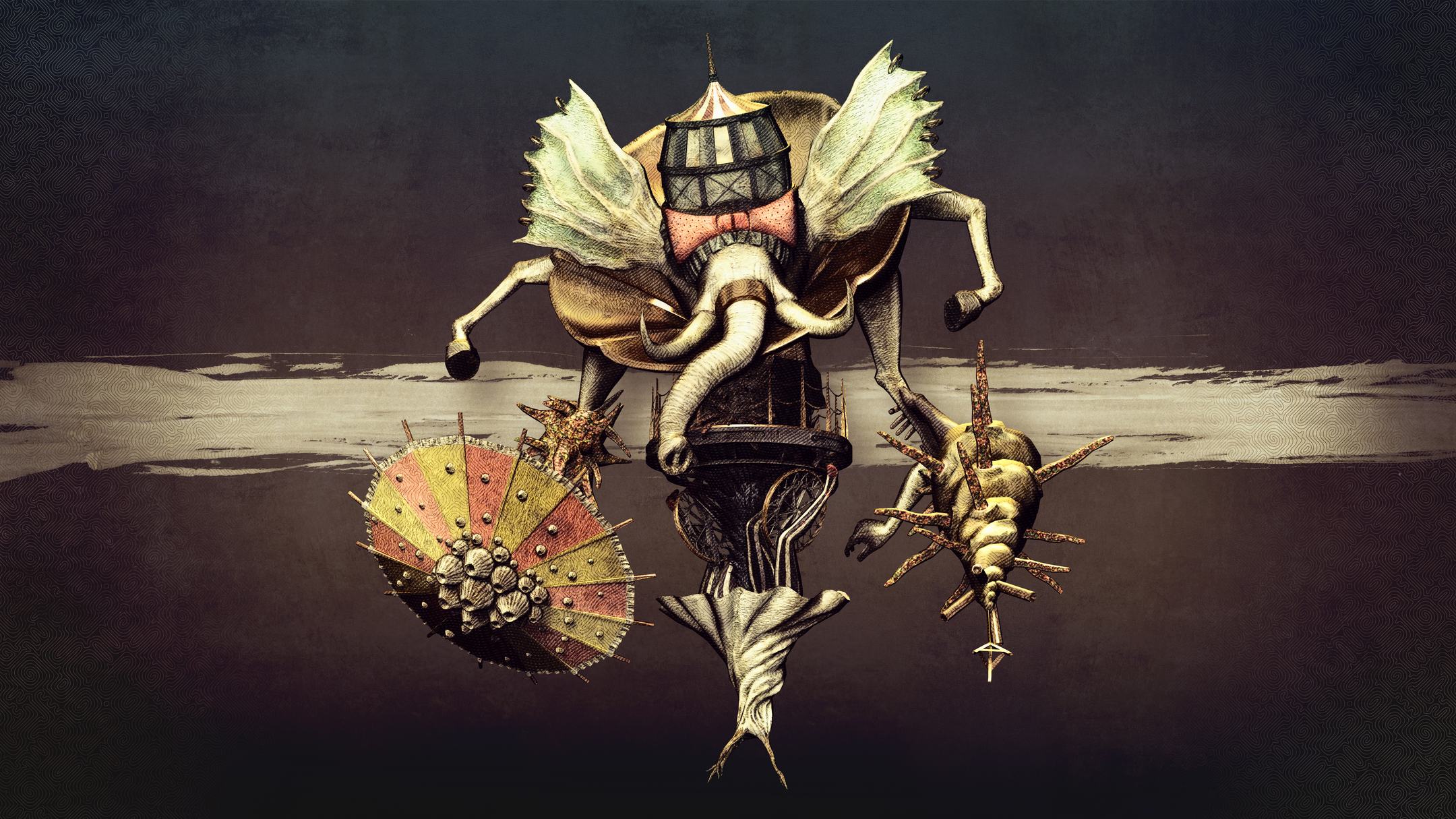 SCARLET NEXUS: A Glimpse into the Mind of the Creator of the Others
close