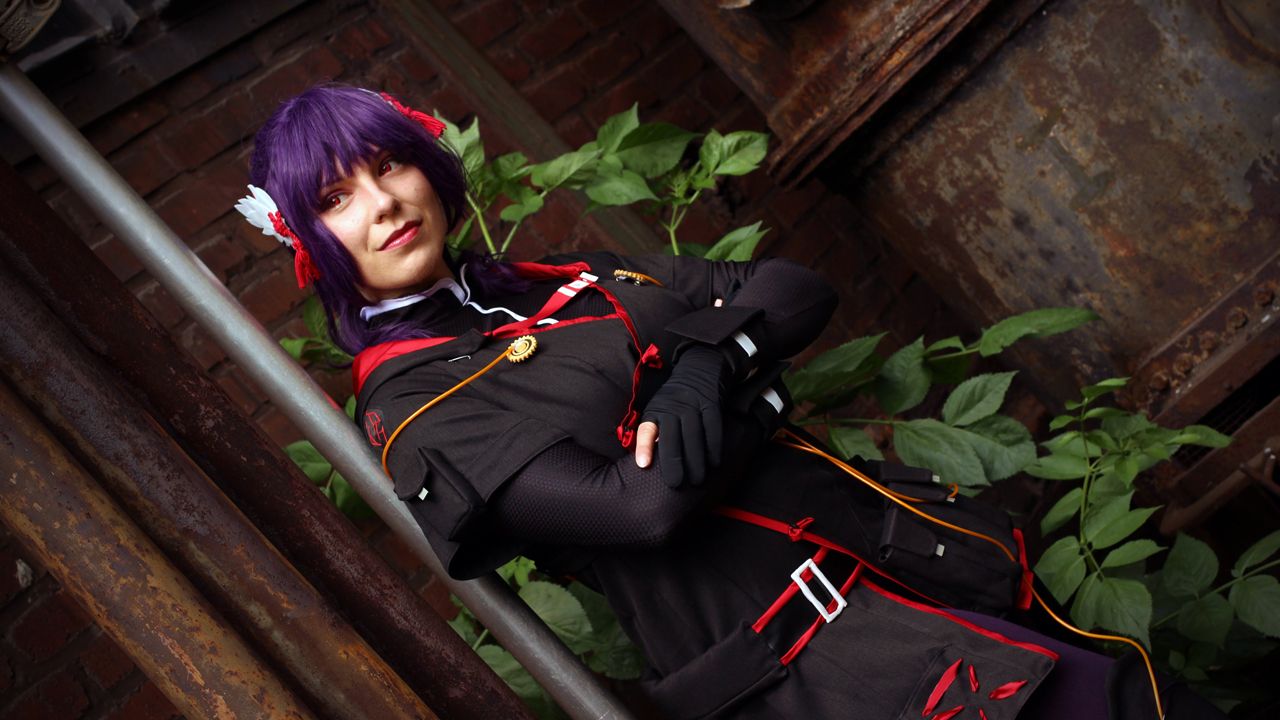 Meet the winners of the international Scarlet Nexus cosplay contest: Kaiona as Kyoka. 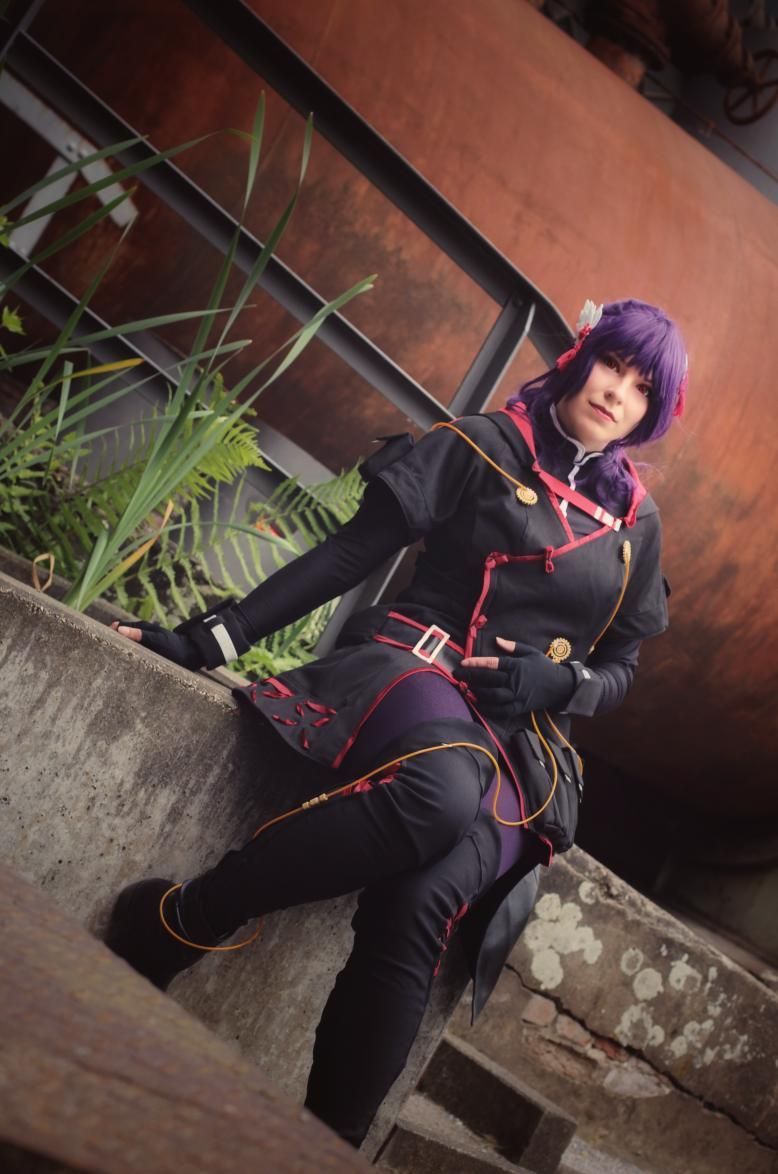 1. A brief introduction – how/when did you start cosplay?

Hi, my Name is Kaiona, I’m a German Cosplayer who started with cosplay around 14 years ago. I loved dressing up since I was a little child. Carnival was my favourite season. Yes, Germans call carnival the “5th season of the year”. At some point I noticed carnival costumes being kind of boring and plain. The costumes you can buy had poor quality, nearly no nice details and not so much diversity. Everybody is always wearing the same and self-made costumes get weird looks. Therefore I slowly lost interest in carnival. Around the same time I saw a short report about cosplay on TV and thought it might be a nice idea to dress up as your favorite Anime-Character outside from occasions as carnival. And that’s how it started. I went to conventions, made many friends and I have ignored carnival ever since. 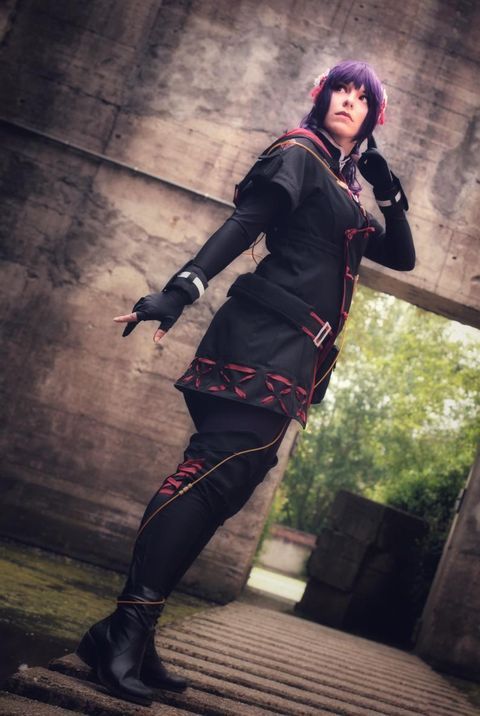 When I saw the first announcement trailer I thought “Hey, that game gives me “Tales of”, “Devil May Cry” and “Persona” vibes! This seems very interesting! Keep it in mind.”

So I have to say, the first thing that got my attention was the probably the look of Scarlet Nexus. And I like it a lot.

I like the character designs. Every character is wearing an individual outfit, but it still looks like some kind of uniform, which I think is quite nice. The enemies look cool and creepy and they are so many different types, the environment is so high-tech-looking, something sci-fi-like, which I like a lot. In my opinion it has a different sci-fi-style compared to other sci-fi-games.

When I saw the first trailer I thought that the battle system seems really fast paced and interesting. And as far as I can say, it is. Adding the twist of throwing things around to hit your enemy is something I haven’t seen before which made me excited to play this game from the very beginning. I like fast paced battles and the variety you get by using the abilities of your teammates is amazing. I don’t want to admit, but I was slightly overwhelmed in the beginning. 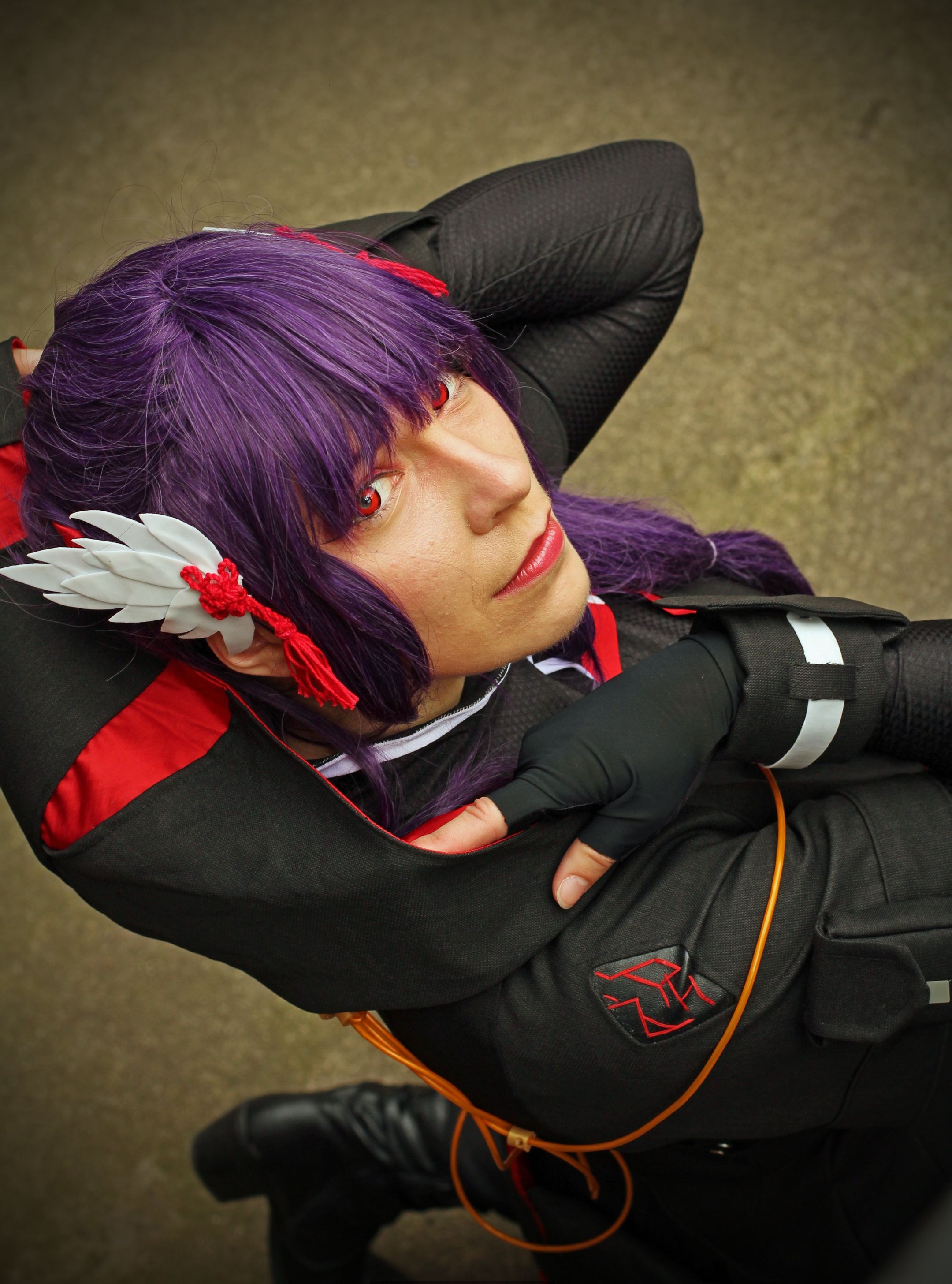 3. Why did you choose this character?

There were 6 characters featured, 3 female and 3 male characters. As I myself don’t like crossplaying very much I had to decide between Kasane, Kyoka and Arashi. Only later I noticed I could have chosen any another OSF-member, as long as they were already introduced. But even so, I’d still have chosen Kyoka.

As I was choosing which character I’d like to “make” I took a good look at the provided materials. Knowing nearly nothing about them, I had to choose by their looks. Arashi is too cute, to strike my fancy. She is really small and “girly-cute”. That’s not my cup of tea. I don’t think I could do her justice and I’m quite sure I wouldn’t feel good, if I was wearing her as a cosplay. Kasane is cool. She looks like the cool beauty and even if I like this kind of character, she didn’t strike my fancy either. I’m not sure why, maybe her hair colour. Kyoka on the other hand, had all I could ask for. I think she is beautiful, I like the combination of her purple hair and red eyes, she has a nice figure, I hope to match, and an outfit I’d like to wear. Her outfit is even bursting with little bags. How awesome is that?

And I guess it was of great help to have wig with the right colour already at home. Her being described as a responsible, caring, kind, strong woman, the leader of a team, someone I might get along with, was a nice bonus. 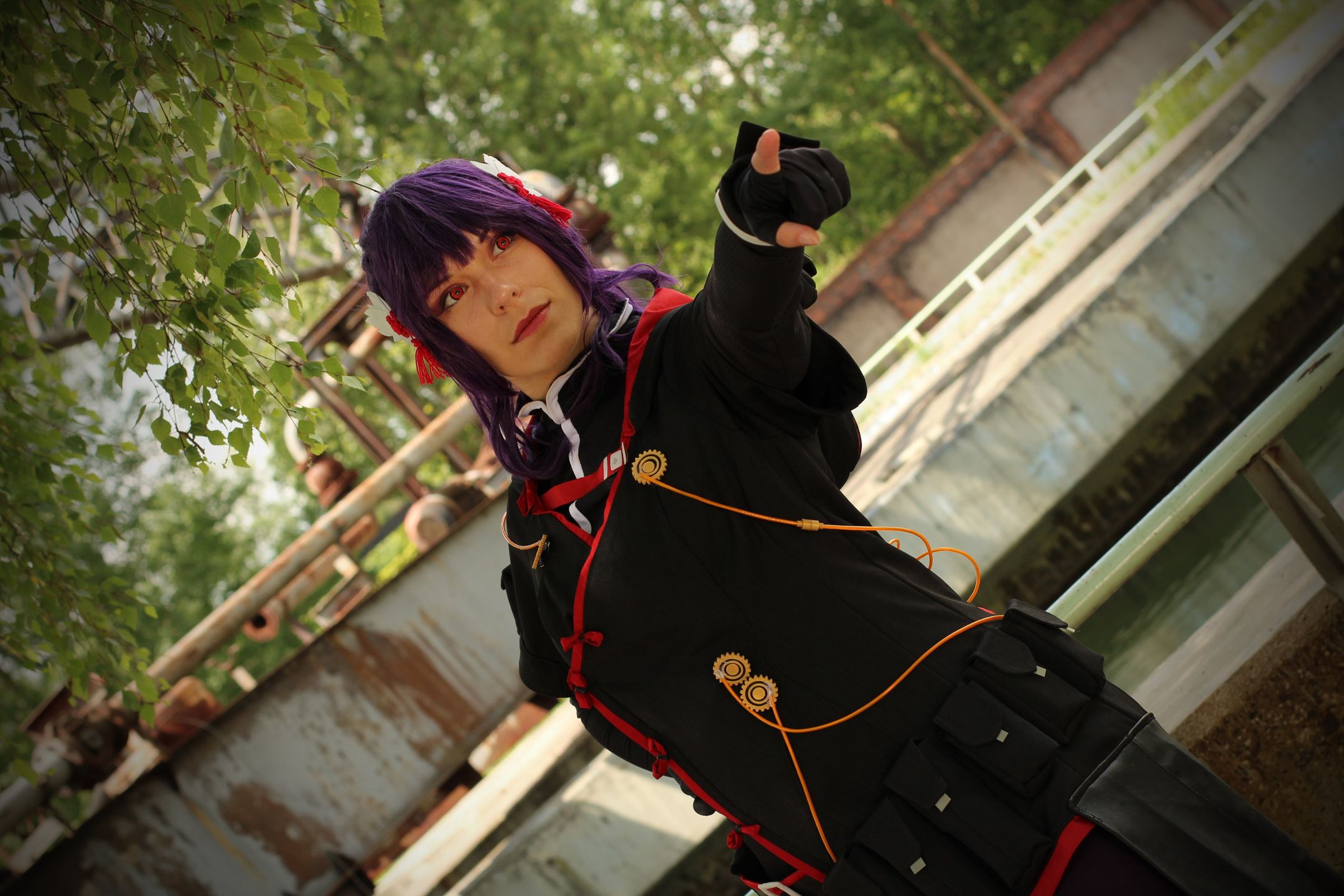 4. Can you describe your costume creation process?

I started with searching for materials. I had the wig, I already had the red fabric, I even found a pair of dark purple leggings I had bought for a costume some time ago. I had no plan what to use as glowing wires, but searching on ebay with random searches like “wire, orange, 20m” and going around several grand stores gave me some ideas. I ordered some fabrics and the wire very soon.

I tend to work on everything at the same time, as some things would arrive later and I don’t want to take large breaks. Even though, this might create chaos.

I started working on the wig. I had one with curls, but straightening wigs is something I really like to do. I styled the ponytail, noticed I hadn’t prepared the red fabrics for the braids, turned to making the sewing pattern for the jacket, noticed the wig being a little bit thin, remade the ponytail, still not having the red straps for the braids, transplanted some wefts on the wig, worked on the jacket again, spent an afternoon on the hair accessories and enjoyed my chaotic order of doing things.

I spent most of the time on the jacket. I remade the sewing pattern about 3 times and gave the sewing process much attention. Some parts were redone a few times, as I wasn’t happy with the result the first time. The duplication-sign on her shoulder was hand stitched and even if you don’t see it, the whole sleeves were more complicated than I thought they would be. The bags are functional and every one of them is closable, as I added little Velcro stripes.

I keep the jacket closed using little hooks. They don’t stand out, like buttons would and are still kind of flexible, making the jacket easy to wear. If you dismiss all of the wires, that is.

The shirt underneath the jacked was easy to make. As you can’t see much of it, it just had to be there and to be close fitting. Although. It is part of the fastening for the jacket.

I could make the gloves separate from the shirt, as the bracelet-like covers would cover the area of my wrists. That makes the costume so much easier to wear.

The wire I bought is usually used as a clothes line. And the gear-like connections with the jacket were 3D printed. Maybe being able to 3D print something for the costume was one of the main reasons I decided to participate in this contest. I still want to add a few more wires, as I think it looks kind of empty right now.

I had a lot of fun while making the over-knees. I used a sort of fabric which is more stretchy than the one I used for the jacket, therefore they became really comfy and nice to wear. They are easy to move in and are not as warm as I thought they would be.

I styled the ponytail 2 times, as I had to rearrange the position of some wefts, as the wig was kind of thin, letting my hair be seen. The braids have one red strand weft in, which I had to sew on to the wig. The wing-shaped hair clips had no intention of keeping to the wig, therefore I glued some claps on, now they stay where they are supposed to be.

5. Which was the easiest/hardest piece to create?

The easiest parts were the gloves. They are made out of lycra and they are fitting perfectly, no matter what I do. No need to think about what I’m doing.

The hardest part was to accept that my first choice of fabrics wasn’t the right one. Originally I wanted to use a kind of stretchy fake leather/patent leather. It was way too thin, hard to work with as it lost its coating and it would stick to itself, if you gave it the slightest chance. I’m sure it would have looked awesome, but the sewing process and solving the sticky problem would have taken more time than I had to spare. Therefore I had to choose another kind of fabrics. I had some heavier cotton-elastane-mix at home. I love the result, but I’m still a little sad I couldn’t go with the more sci-fi-like fabrics. 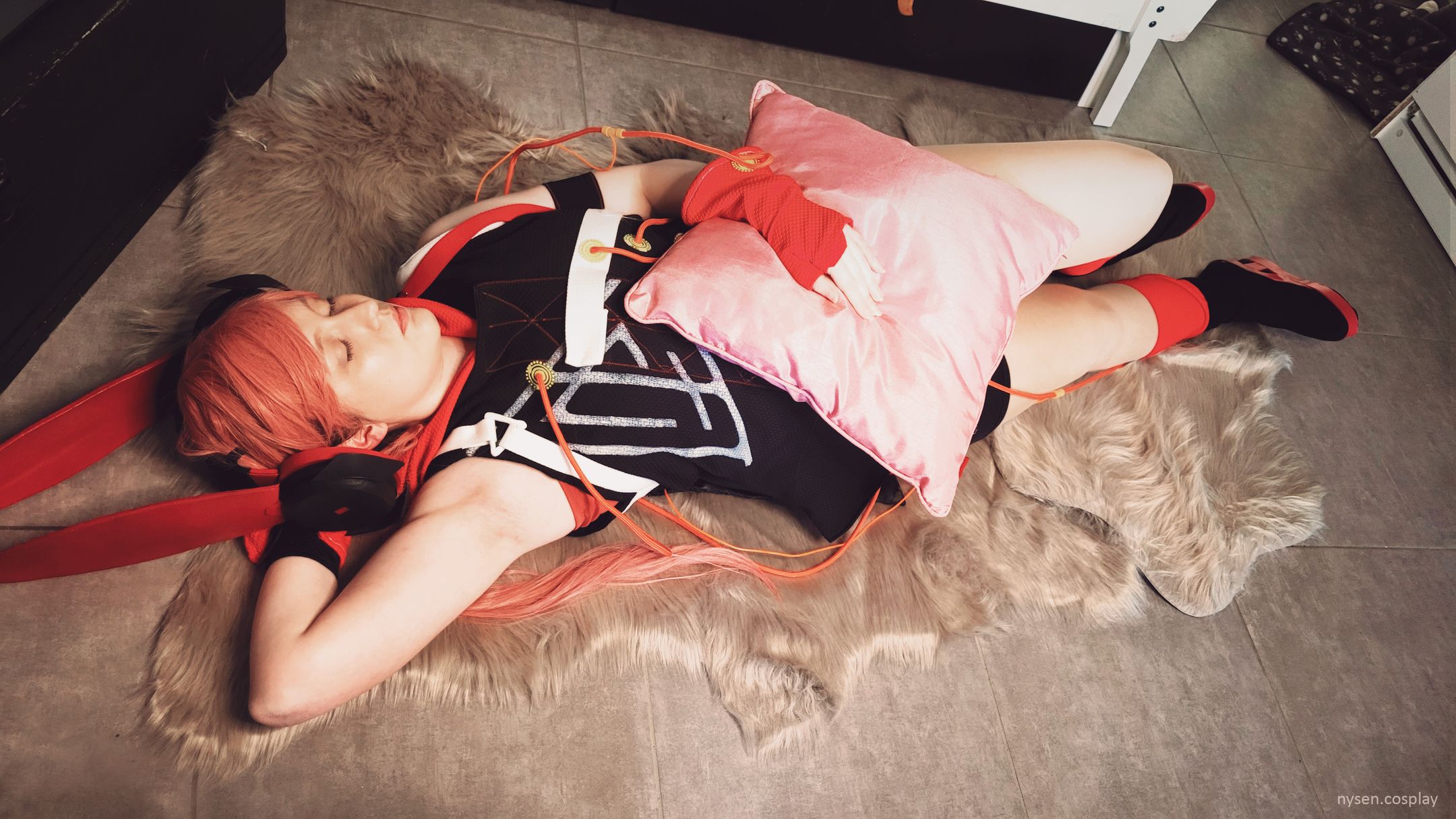